Paul Pogba was among the stars to speak out in support of Simone Biles after the American gymnast opted to take a step back and withdraw from events at the Olympics.

Biles announced on Thursday that she would not be participating in the individual all-around competition at the Tokyo Games to focus on her mental health.

Her announcement came shortly after she opted to remove herself from the team competition, earning her praise from several top athletes for valuing her own well-being in a time of immense pressure. 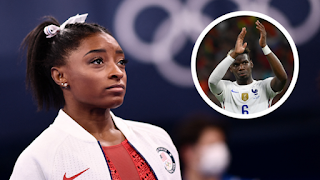