AC Milan head coach Stefano Pioli has proposed some radical changes to football’s rules that he believes will make the sport more exciting.

Pioli was initially asked about the five substitutes rule and how it benefits his team, which prompted the 55-year-old to suggest some more innovations.

One of those includes a rule preventing teams from going back into their own half after they’ve crossed the halfway line, similar to basketball’s backcourt violation, which Pioli says would encourage more attacking play. 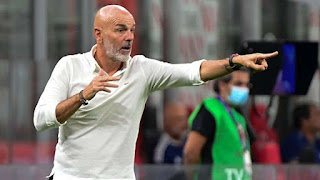