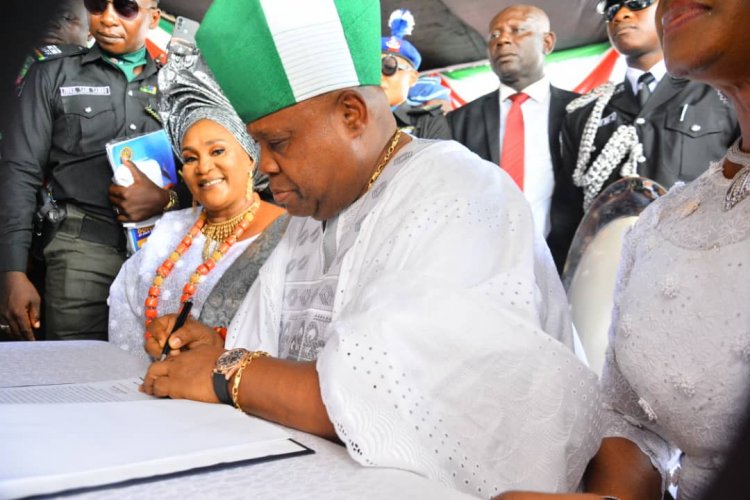 The newly inaugurated Governor of Osun State, Ademola Adeleke, has frozen all government accounts in the state.

Adeleke directed this in his first executive order upon inauguration on Sunday.

Adeleke, in his speech delivered at the inauguration, alleged that the erstwhile governor of the state, Adegboyega Oyetola, carried out some actions “maliciously” after he (Adeleke) won the July 16 governorship election, including “hurried” employments without provisions to sustain them.

He claimed these actions were roadblocks channeled at making things difficult in his administration difficult.

Adeleke also reversed the state name from ‘State of Osun’ to ‘Osun State’, saying the former was alien to the constitution.

“My Good People of Osun, since you elected me as your governor on the July 16, 2022, which the Independent National Electoral Commission announced on July 17, 2022, the former Governor, Alhaji Gboyega Oyetola, maliciously started putting road blocks to make things difficult and almost impossible for the new administration to serve you.

“Appointments of several Obas were hurriedly done without following due process, just to mention a few.

“All efforts to get the governor set up a Transition Committee and submit hand-over notes in line with best practices proved abortive.

“It is therefore my desire to ask for your patience and understanding to give my administration a few weeks to review and sort out all the actions and malicious confusions which the immediate past administration has created since July 17, 2022. Those actions were indeed vindictive measures against the people of Osun State for voting them out of office,” Adeleke said.

Giving new orders, he said, “Consequently, I hereby issue the following directives which will be backed up with appropriate Executive orders:

“Immediate freezing of all government accounts in banks and other financial institutions;

“Immediate establishment of a panel to carry out an inventory and recover all government asset.

“An immediate establishment of a panel to review all appointments and major decisions of the immediate past administration taken after July 17, 2022.