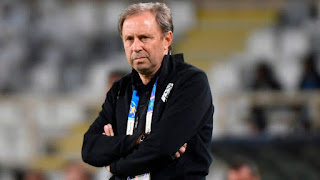 Ghana coach Milovan Rajevac has lamented his team’s lack of concentration in critical match moments following their 1-1 draw with Gabon at the Africa Cup of Nations on Friday.

The Black Stars gave away a goal lead to settle for a point in the Group C matchday two fixture after Jim Allevinah netted two minutes to full-time to level the score.

It was Ghana’s second straight time of letting in a late goal after they conceded in the 82nd minute in their 1-0 loss to Morocco in their tournament opener on Monday.

“It was a difficult and competitive game. We were supposed to end the match winning, but as in the first game we lost concentration,” Rajevac said at the post-match press conference on Friday.

“I think in the next game we will do better and we will be able to collect the three points to move on to the next stage. We need to stay focused and be strong-minded to move on.

“I have full faith in my team. It’s not an easy start but we will find strength and motivation and try to go as far as much as possible.”

Ghana occupy the third position on the group table, with only a point to their name.

Gabon, meanwhile, sit second on the log with four points, having earlier beaten Comoros in their tournament opener.

Head coach Patrice Neveu believes the 1-1 draw with the Black Stars was not out of place.

“We did not play well in the first half, like the first game. In the second half we were more offensive, and we trusted ourselves,” said The Panthers boss after the game.

“I think the draw is a fair result. We missed many players, but Ghana didn’t dominate us.”

Ghana have their job cut out ahead of their last group game against Comoros on Tuesday as nothing but a victory can keep them in the competition.

With Morocco on six points, the Black Stars’ best possible finish at the end of the group stage will be a second-placed spot.

Serbian coach Rajevac has been tasked to lead Ghana to a fifth Afcon title.