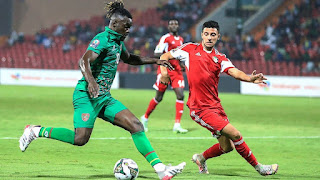 Cande’s men are determined to beat the Pharaohs to boost their hopes of reaching the competition’s knockout phase, the AS Monaco star has declared

Judilson Mamadu Gomes ‘Pele’ says Guinea-Bissau will give “everything” to secure a win over Egypt in Saturday’s Africa Cup Nations’ fixture.

The West Africans, who are making their third appearance in the biennial African football showpiece, settled for a disappointing 0-0 draw against Sudan in Garoua.

Despite dominating ball possession and creating numerous scoring opportunities, the Djurtus failed to silence the Falcons of Jediane.