The Argentine striker has explained why he opted to wear the No.19 jersey instead of the one previously worn by his compatriot

Sergio Aguero has revealed that he refused to take Lionel Messi’s No.10 shirt while talking up the talents of Barcelona team-mate Ansu Fati.

Aguero joined Barca on a free transfer following his departure from Manchester City at the end of the 2020-21 campaign, and was initially expected to link up with fellow Argentina international Messi at Camp Nou.

However, that scenario never materialised as the Blaugrana saw Messi leave amid their struggles to reduce their crippling wage bill, and Aguero has now admitted that he turned down the chance to inherit his compatriot’s highly-coveted jersey. 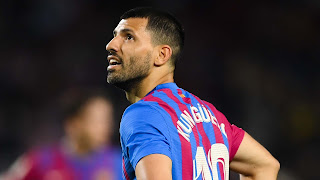