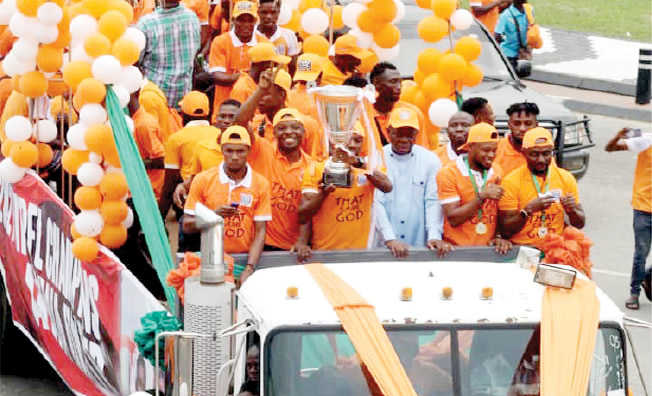 AKWA United on Monday had a colourful trophy parade across Uyo, the Akwa Ibom State capital and its environs, with the pictures of the parade flooding the social media space.

The trophy is the club’s first since its establishment in 1995.

Parading the trophy across streets is not a tradition in the NPFL, but Akwa’s carnival-like show on Monday is in sharp contrast to that of Enugu Rangers, who were crowned the Nigeria Professional Football League champions in 2016, after a 32-year wait.

The parade in Enugu, which was much talked about, ended in farce as the then NPFL champions paraded the major streets of the capital city in a worn-out open truck with angry fans reportedly howling at the team.

Some others took to social media to vent their anger at what they termed a disgrace.

Touched by the public outcry, Enugu Rangers apologised through their Twitter handle for the show of shame.

“We are sincerely sorry for the embarrassment yesterday during our victory parade. God bless you all,” @RangersIntFC tweeted October 16, 2016.

For Akwa, it was a celebration of a hard-earned NPFL title after a 26-year wait and they did it in style. With a banner which had “2021 NPFL CHAMPIONS AKWA UNITED …THAT SAME GOD” hung on the sparkling truck, as well as ballons and ribbons in Akwa United’s traditional colours of orange and white, the team’s officials and players cruised major streets of the capital city with their fans cheering in delight.

An Akwa United fan in Uyo, Emem Itu, who described the trophy parade as a “carnival” said it was a once in a lifetime opportunity for him.

“I’m so happy, never knew I would ever see such in my hometown. I only see European clubs parading their trophies, I never knew it could happen in Uyo. This is a wonderful innovation by Akwa United management,” Itu said.