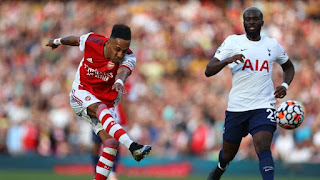 Arsenal captain Pierre-Emerick Aubameyang has become the player to have scored the most goals against Tottenham Hotspur since 2016, when he first opened his account against the Gunners’ North London rivals, with a strike in Sunday’s derby triumph.

The Gabon international notched his eighth goal in his 12th appearance against Spurs on Sunday as Mikel Arteta’s side secured a 3-1 win in the North London derby.

Five years after he scored the opening goal in Borussia Dortmund’s 3-0 thrashing of Tottenham, no player has found the back of the net more than the 2015 African Footballer of the Year against Spurs in the intervening period.