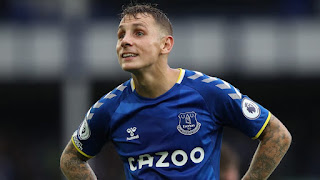 Digne spent three-and-a-half years on Everton’s books after signing from Barcelona in the summer of 2018, featuring in 127 games across all competitions for the Merseyside outfit.

The 28-year-old had been a key player in the squad until a public fallout with head coach Rafael Benitez in December 2021, with Chelsea, who were also initially keen on the Frenchman, deciding against making an official bid.