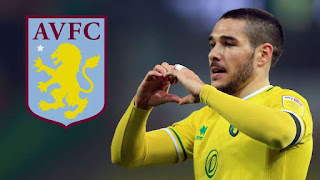 The Argentine winger has committed his future to the Lions through to 2026, bringing to an end his three-year stay at Carrow Road

Villa announced they’d reached an agreement to sign Buendia on Monday, and the move has now been made official following the winger’s successful medical on Thursday.

Buendia, who was heavily linked with Arsenal throughout the 2020-21 campaign, has signed a five-year deal at Villa Park and will join up with his new team-mates for the start of pre-season.