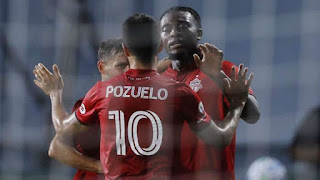 Ayo Akinola scored his second goal of the MLS regular season with Toronto FC securing a 2-1 win over Philadelphia Union.

The Canadian outfit has been enjoying a resurgence in America’s premier soccer competition after suffering back-to-back defeats against rivals Montreal Impact and Vancouver Whitecaps. Since then, they have seen off Impact, drawn against DC United and beaten New York City FC and also Columbus Crew.

Akinola last scored in the draw with DC and Toronto started on the backfoot against the Union with Brazilian forward Sergio Santos getting the opening goal in the just the fifth minute of play, lobbing the ball over Andre Blake in goal.