In a game in which both teams had numerous goalscoring chances, an 11th minute own goal from Getaneh Kebede settled an evenly-balanced contest

On the back of a tough trip to Ethiopia last weekend for Bafana Bafana, Tuesday’s 1-0 World Cup qualifier win over the same opponents saw the South Africans stretched to their limits at FNB Stadium.

While conceding that his side made heavy weather of the victory, Broos was pleased that his men found a way to grind out the three points.

“We tried to neutralise the midfield, but we didn’t really succeed. And therefore the danger was always there,” the former Cameroon manager told Safa media. 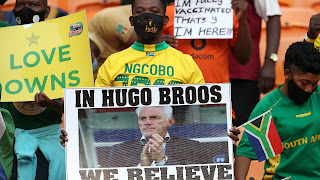