Cardi B and Candace Owens have been going at each other for days after the latter tried to shame the rapper for her sexually charged performance of “WAP” at the Grammys.

Cardi hit back and things went downhill from there, with both women calling each other out, accusing each other’s husbands of infidelity, and threatening to sue.

Cardi first hit out on Twitter by retweeting the video of Candace criticising her on Fox News for her Grammys performance. 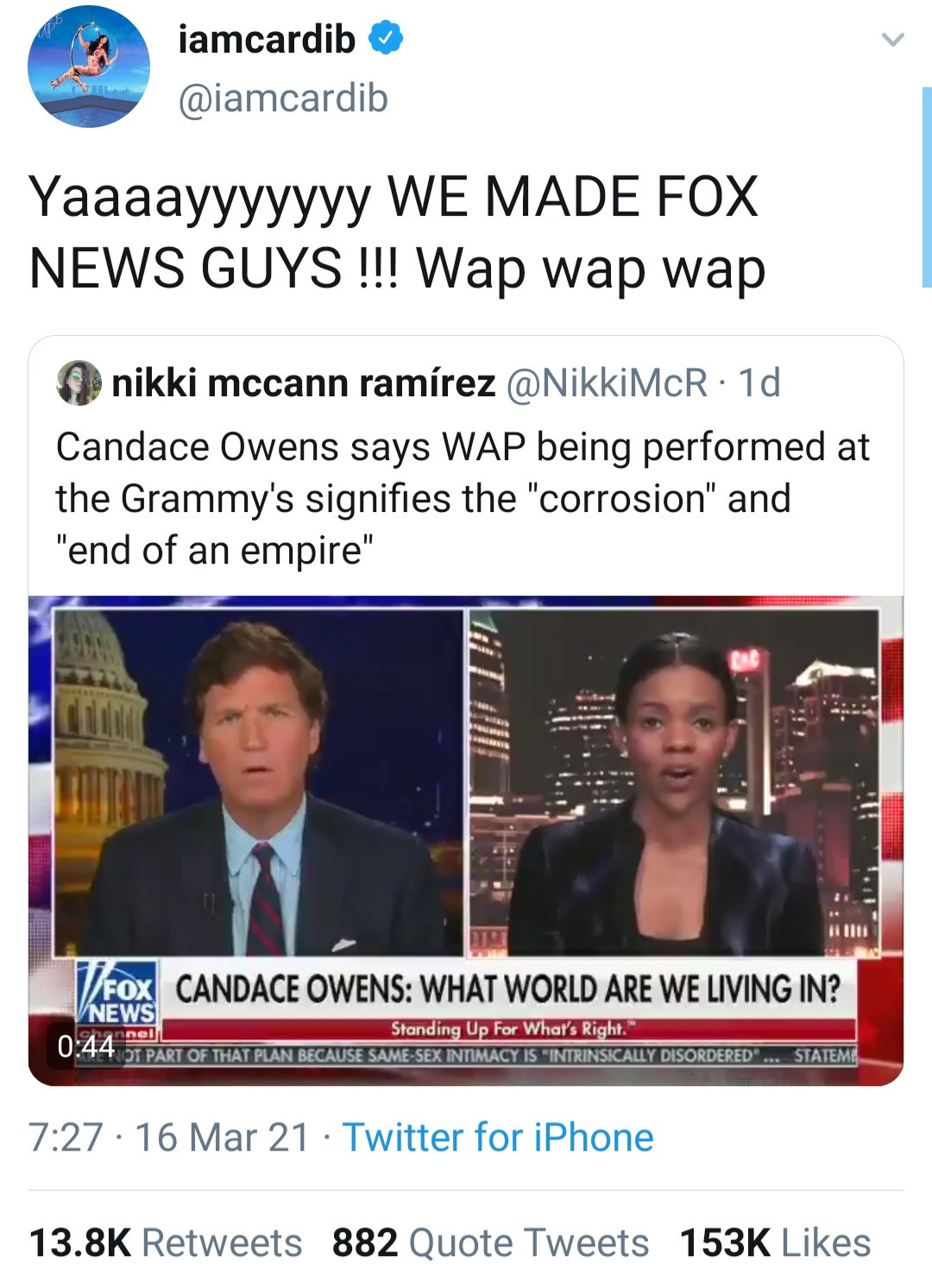 The rapper added: “Matter fact I’m just going to thank Candy. She put my performance on Fox News giving it more views that boosted the views on YouTube and is counting towards my streams and sales. STREAM UP AND WAP .REMEMBER GROWN PARENTS ONLY YOU CAN MONITOR WHAT YOUR KIDS WATCH NO1 ELSE.” 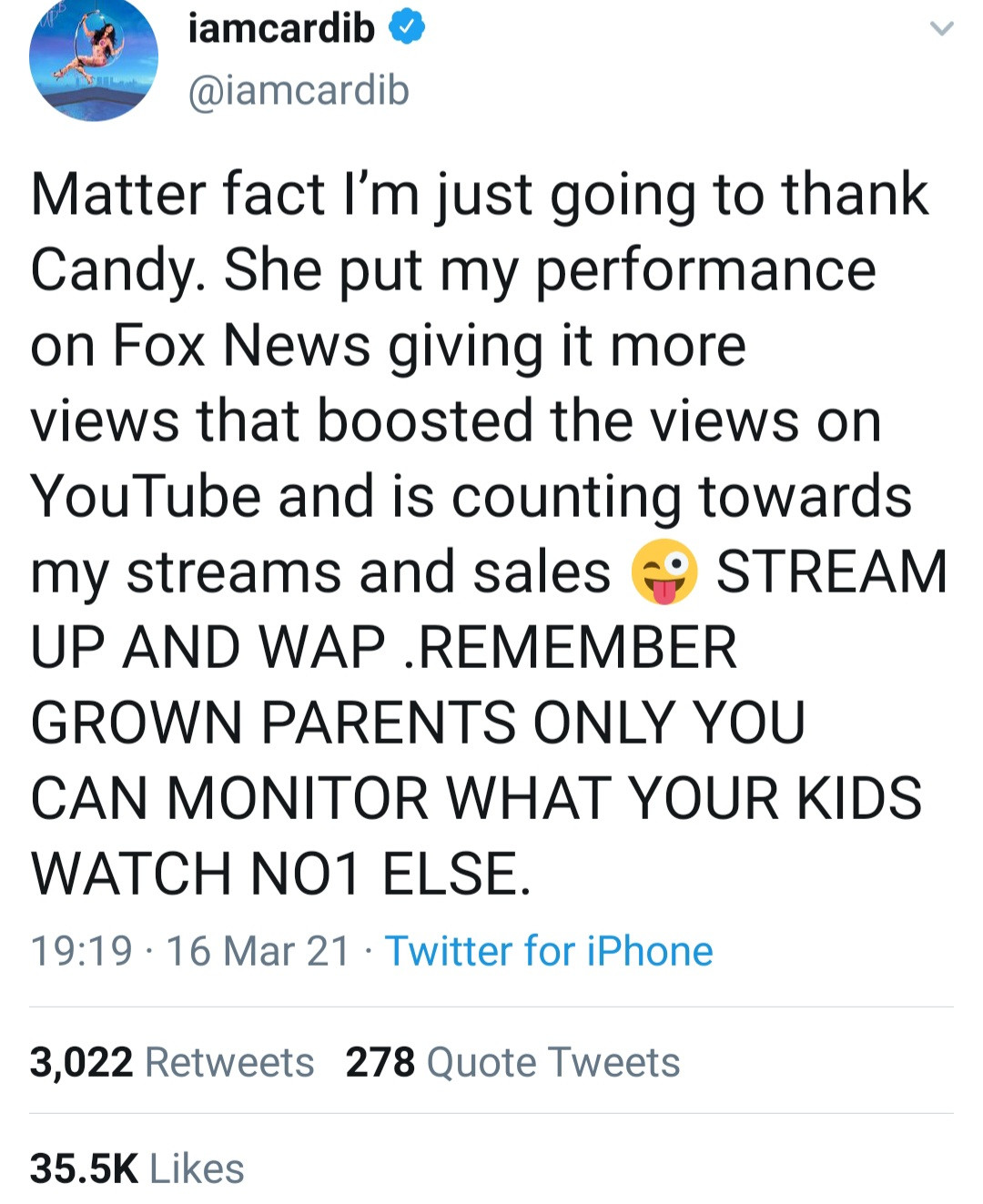 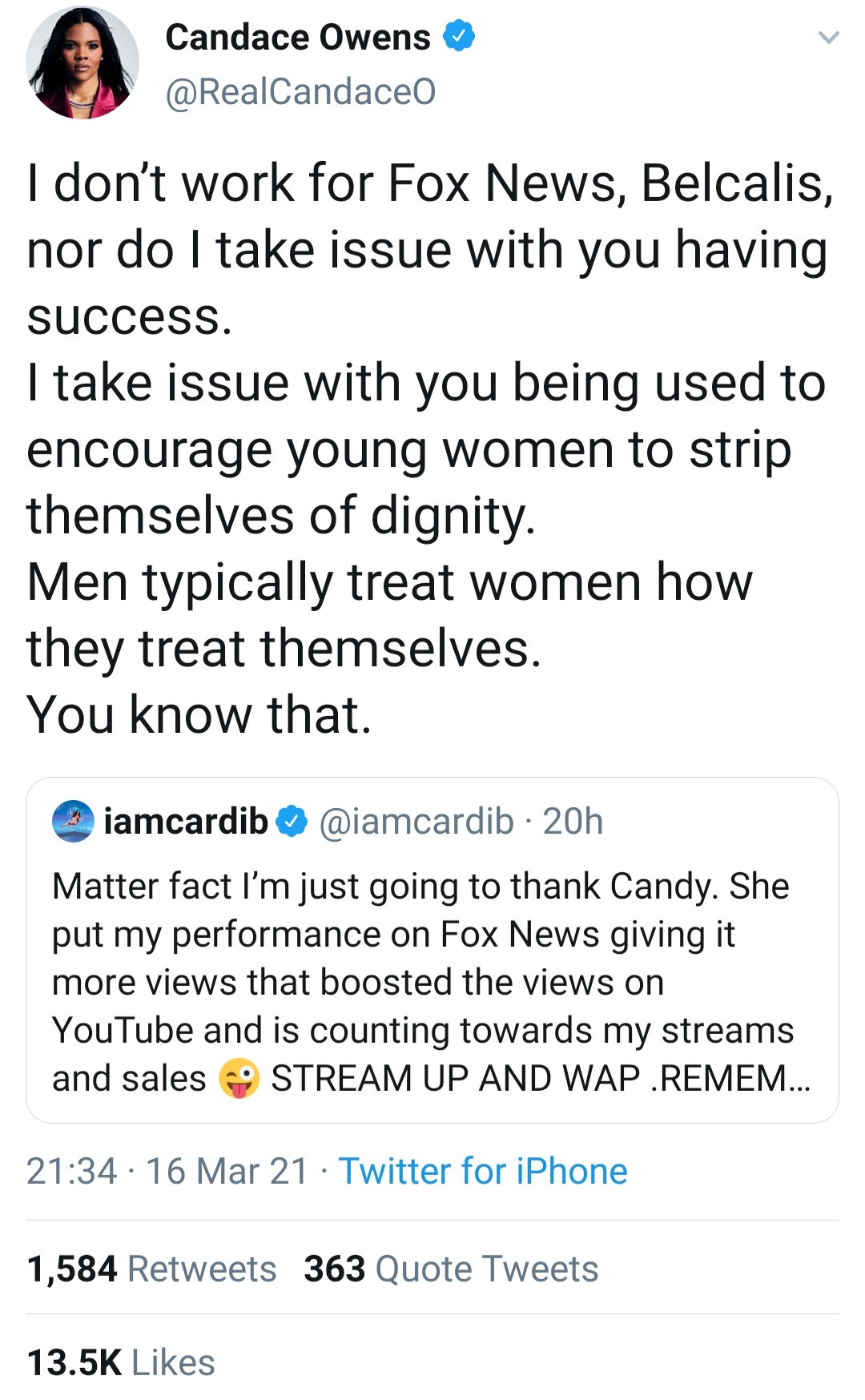 “You are a cancer cell to culture. Young black girls are having their minds poisoned by what you are trying to package and sell to them as “empowerment”.

“I’m one of the few that has courage to tell you the truth. You should thank me.” 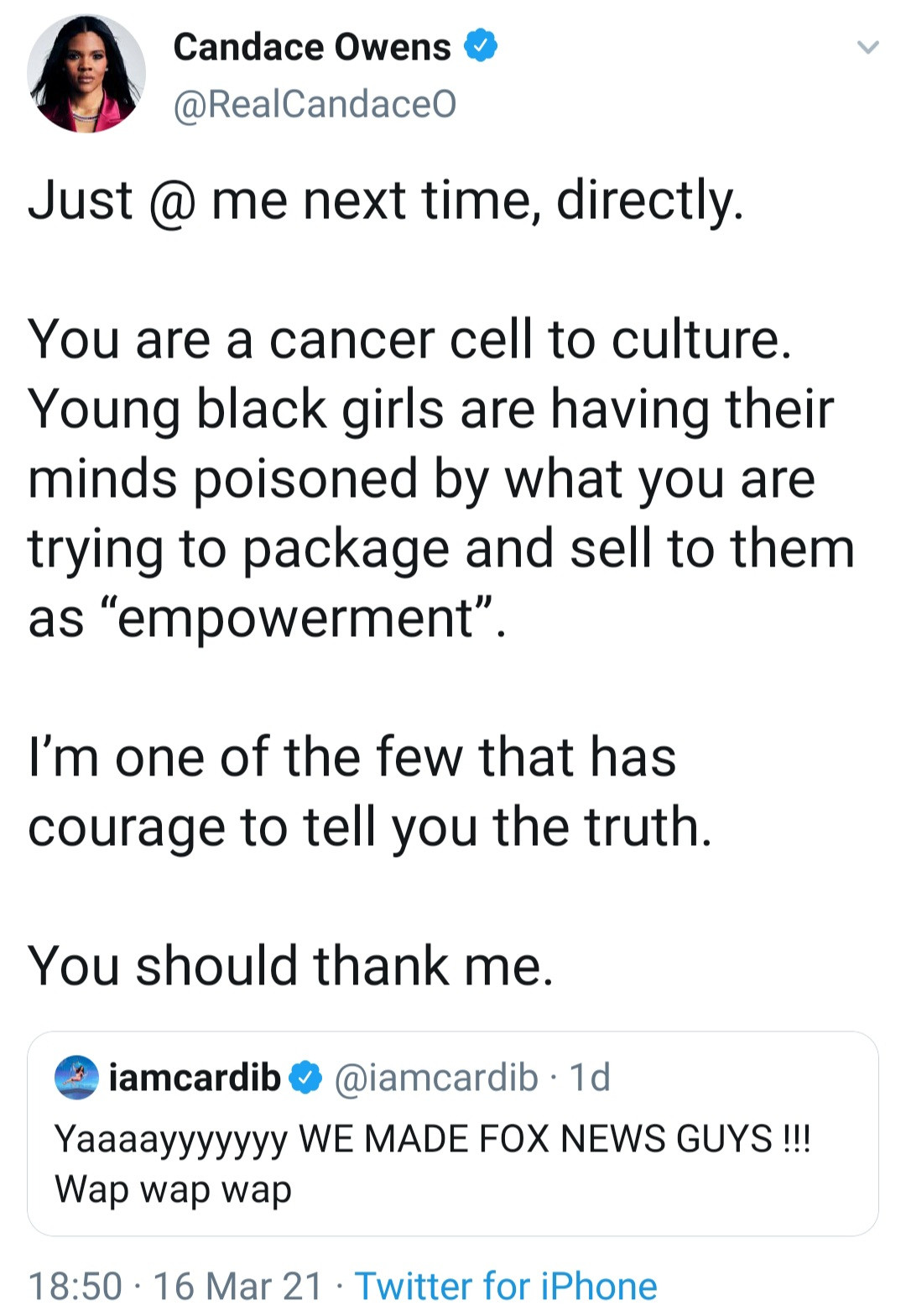 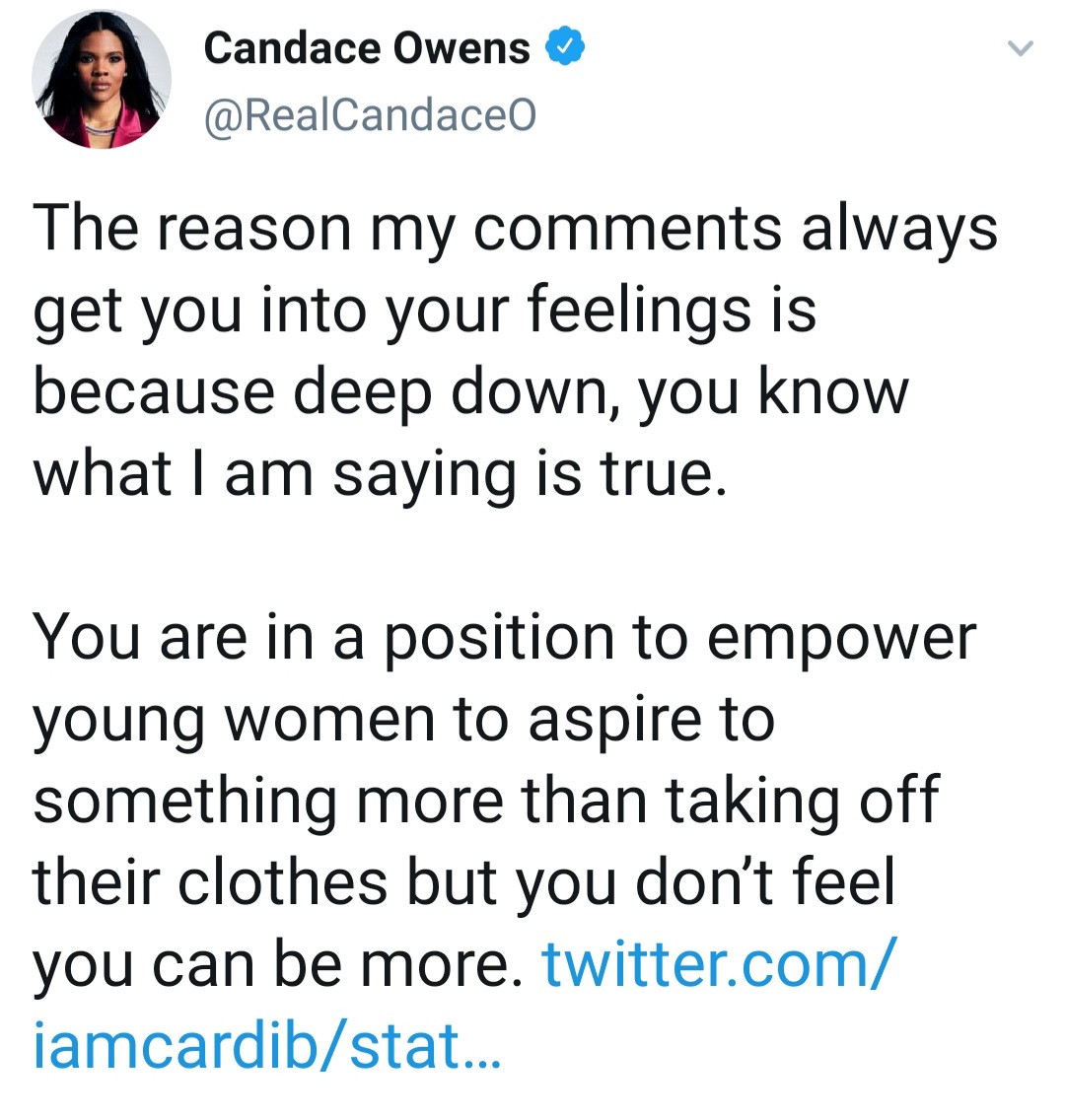 Soon, they were talking about role models and Cardi cited Melania Trump’s nude modeling past as her inspiration.

Candace, who is a firm supporter of the Trumps, slammed Cardi, writing: “What is your obsession with the Trump family? You are digging up modeling shots from our former First Lady from 3 decades ago. She has evolved. You have not. What you did at Grammy’s was disgusting. Own it.” 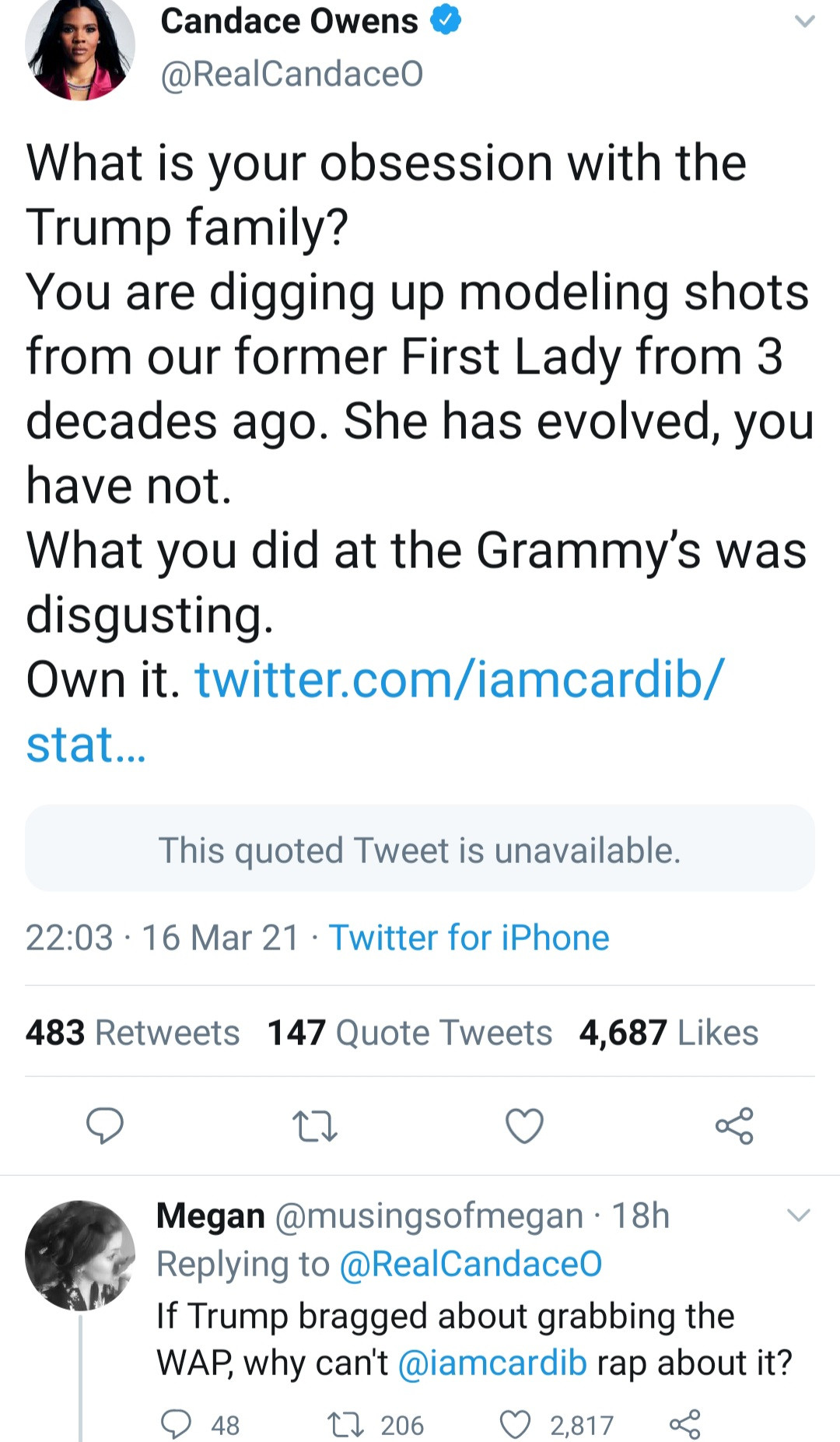 Cardi replied: “I’m obsessed she’s my idol. She showed me I can be naked perform wap and still be a First Lady one day ! ….wait so only White women can be naked and show their sexuality and evolve in their 30s but I can’t ? Wow America is soo unfair.To think this was the land of the free.” 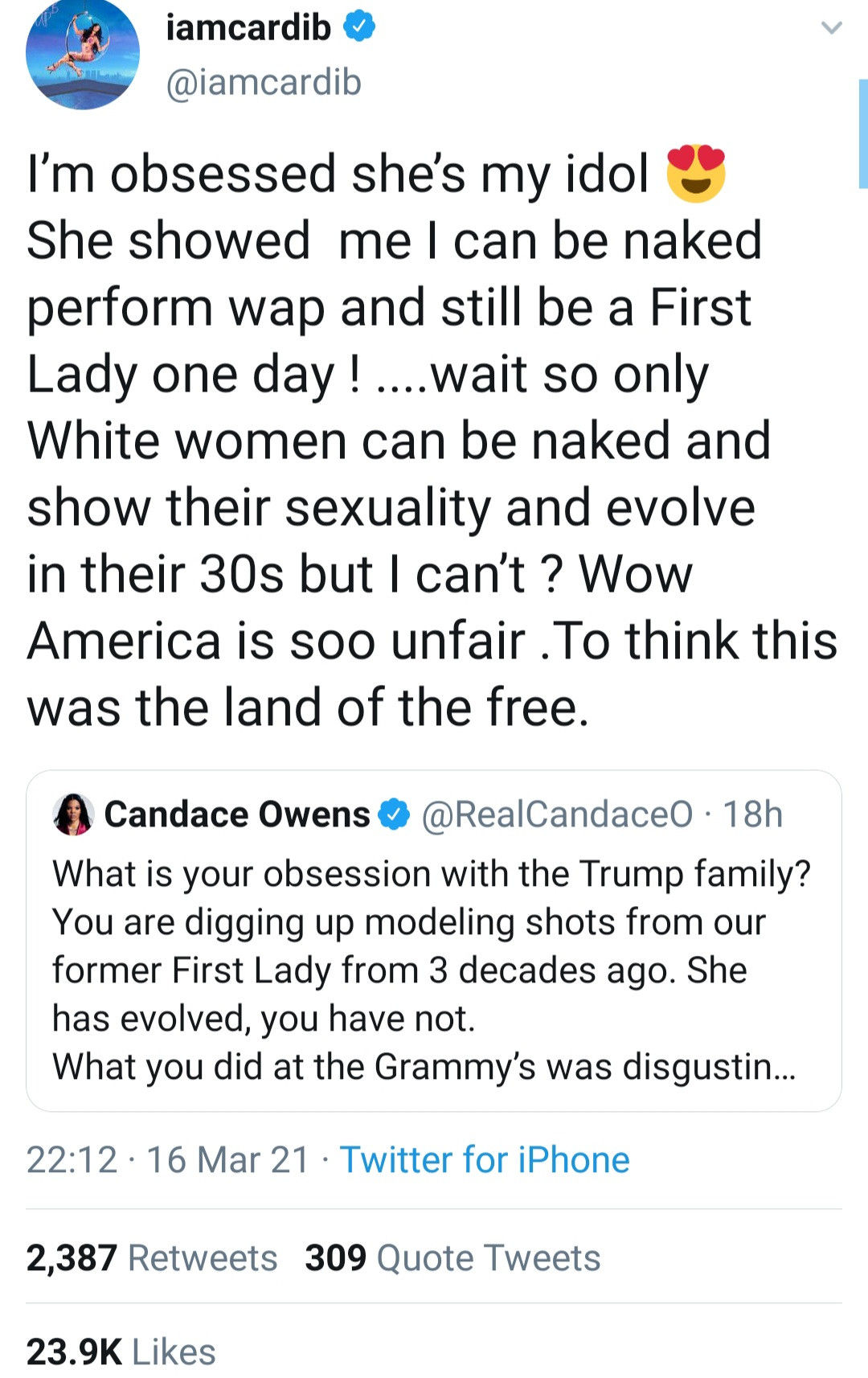 Candace then told Cardi black women shouldn’t see her as a role model and Cardi responded by sharing a video of a pregnant Candace cooking. 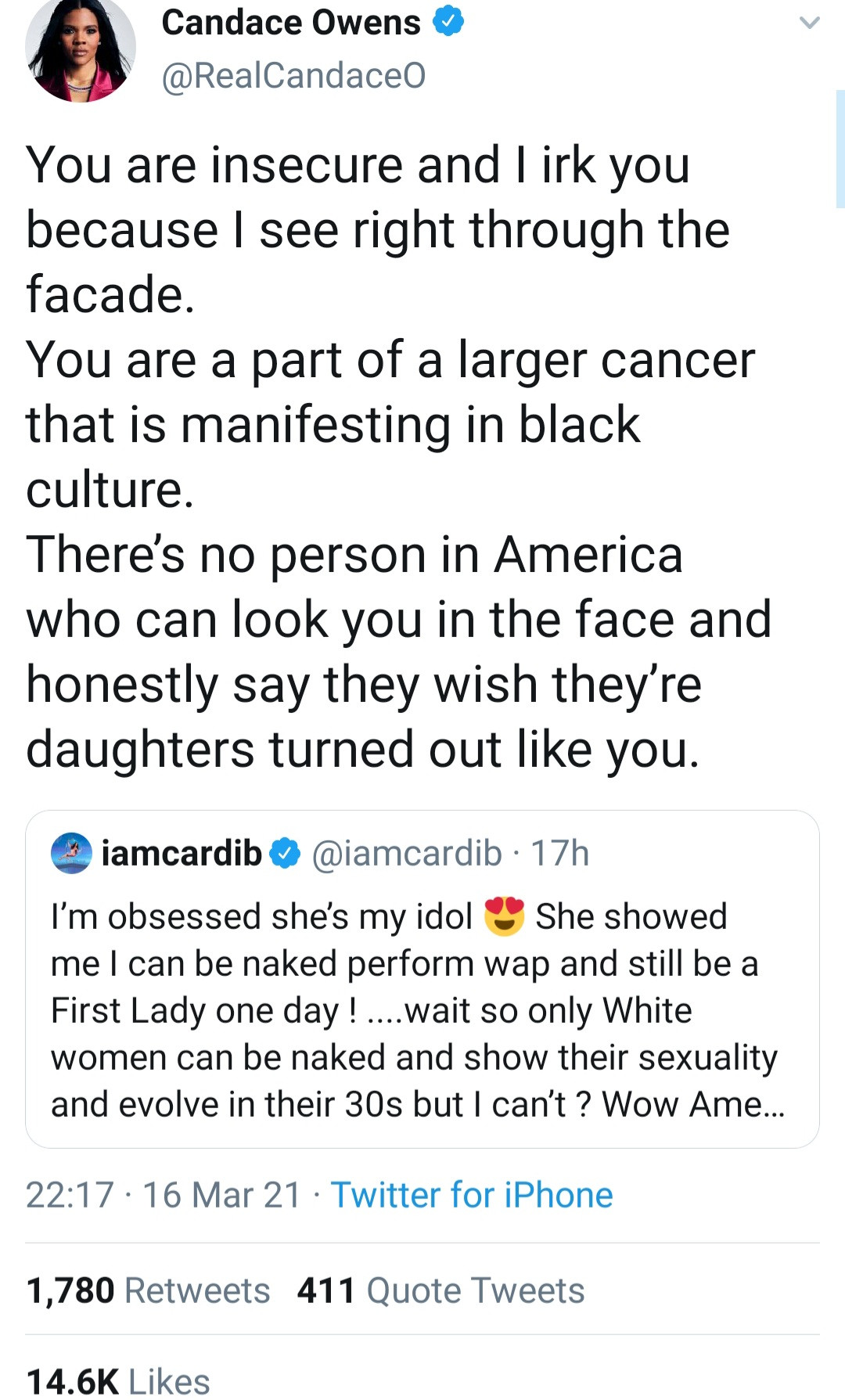 Cardi captioned the video: “And Black women should be more like you? After all the fighting for equality and freedom they should be submissive to a white man?” 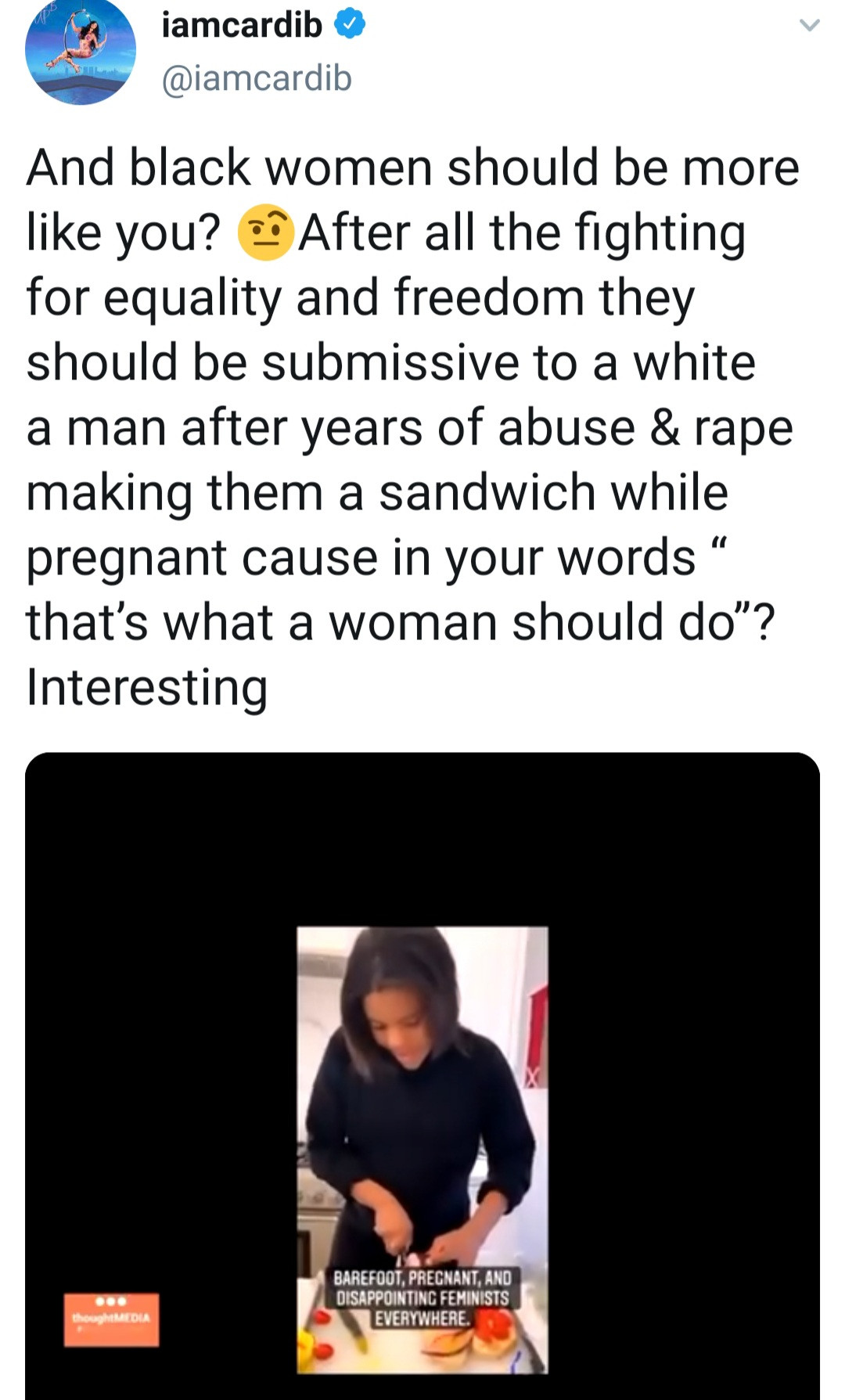 Soon, both women began insulting each other’s husbands, with Candace taking a dig at Cardi about Offset’s infidelity. 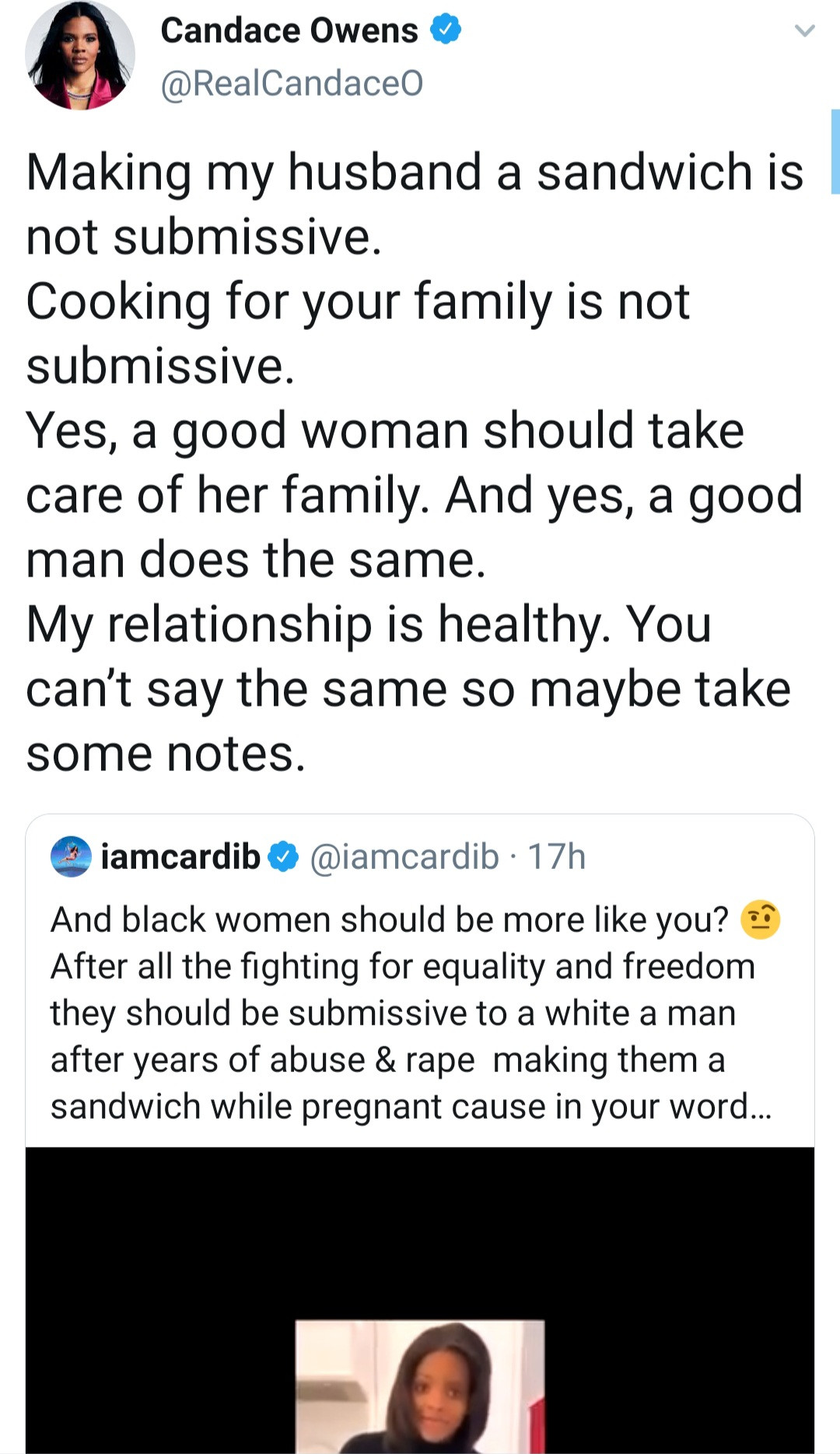 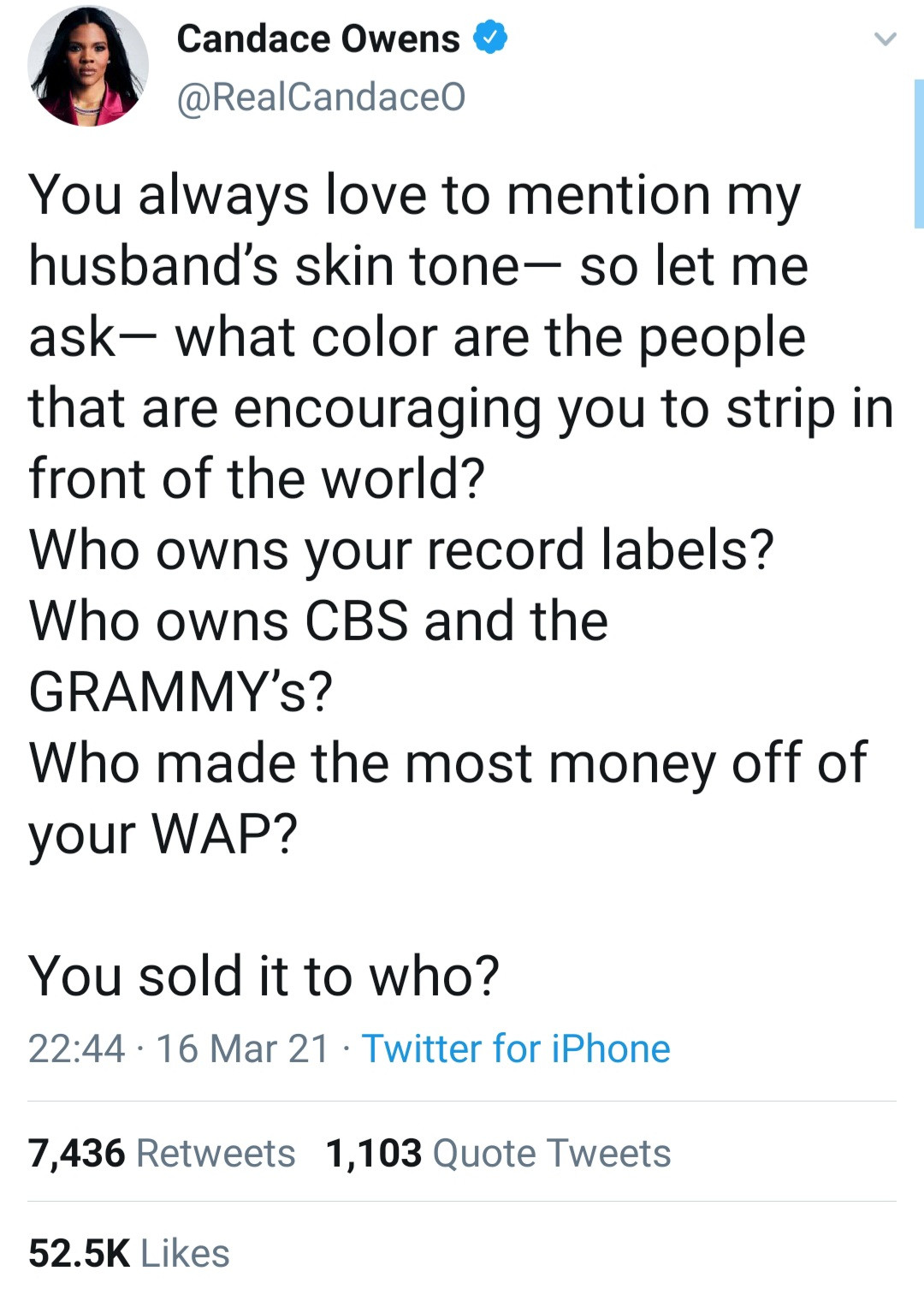 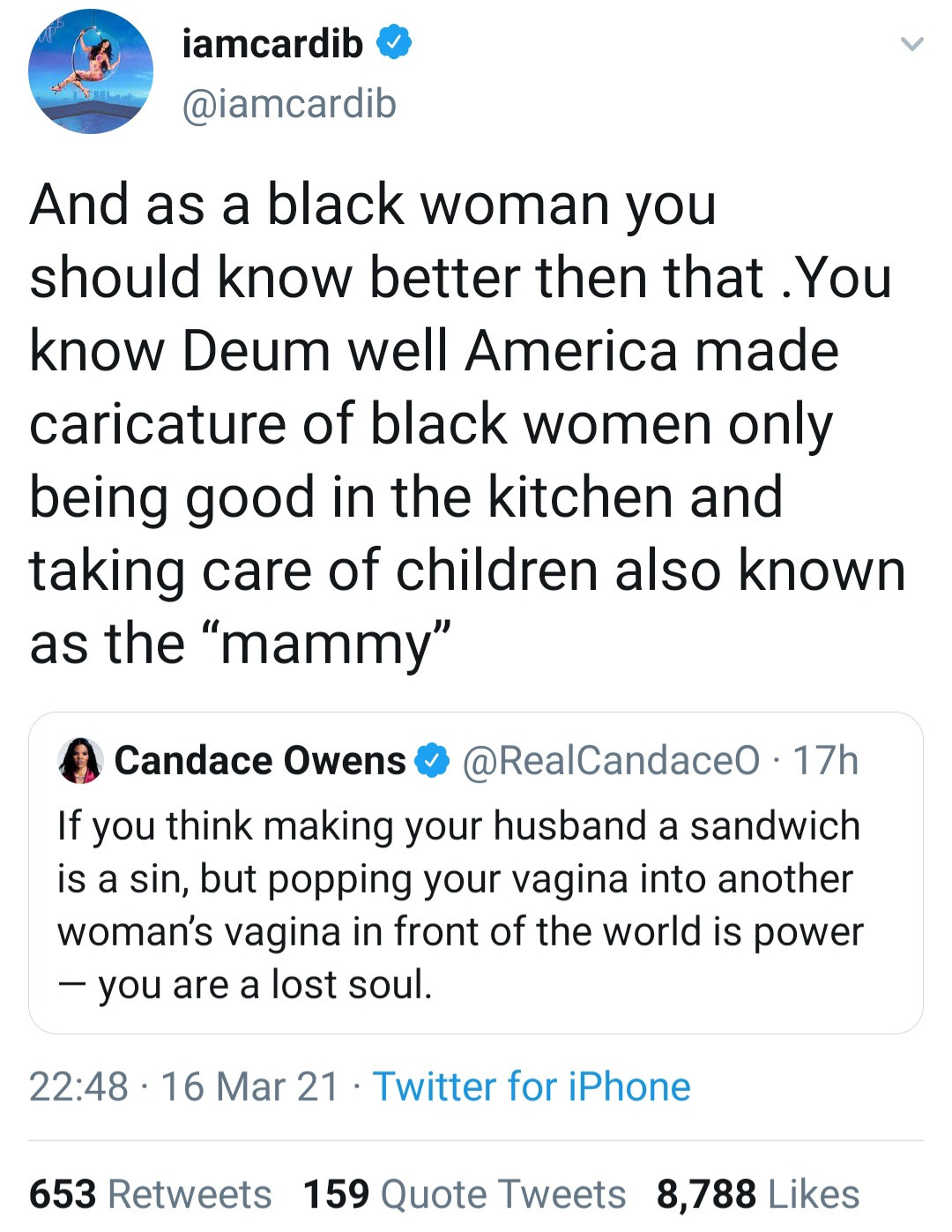 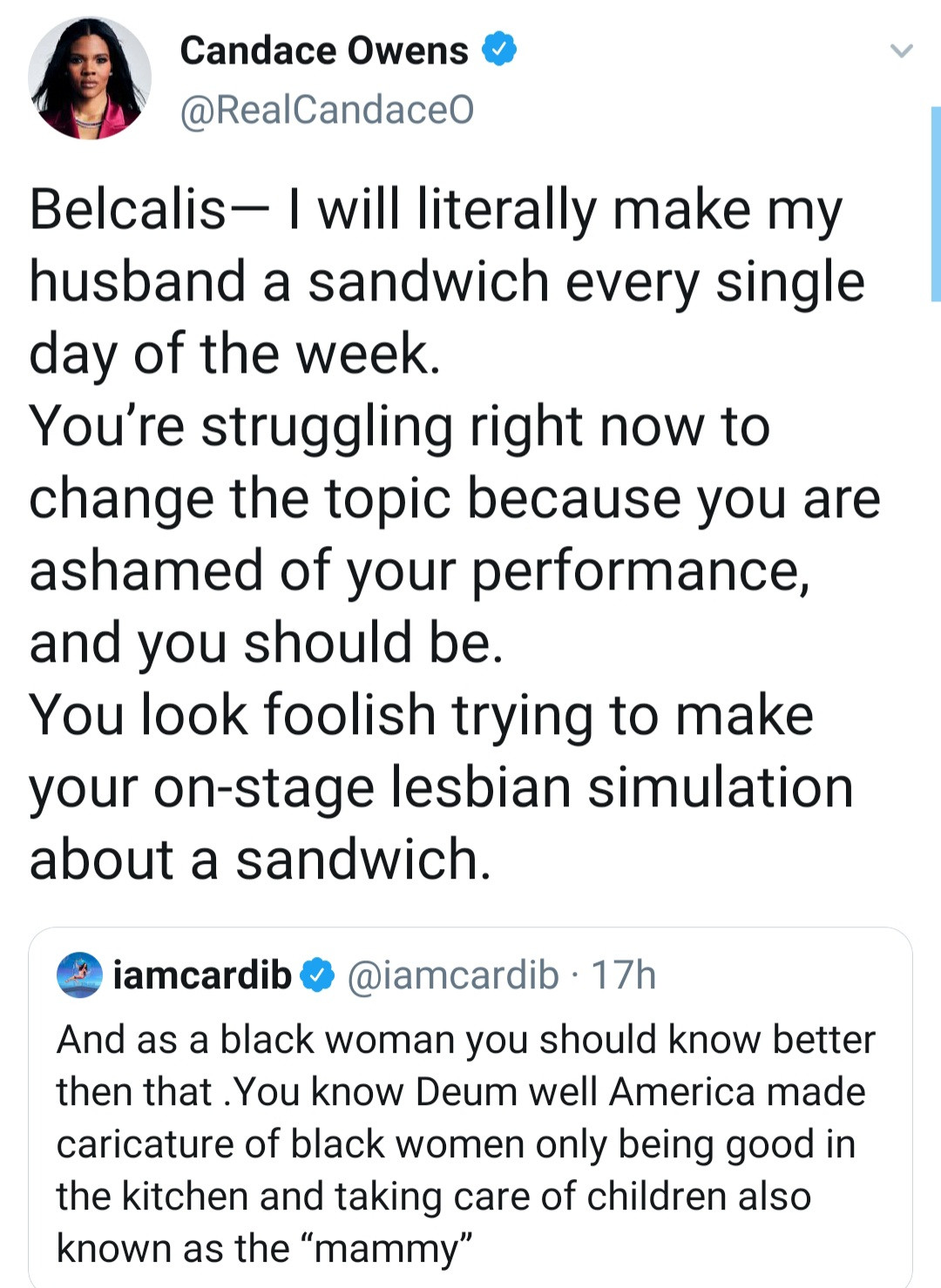 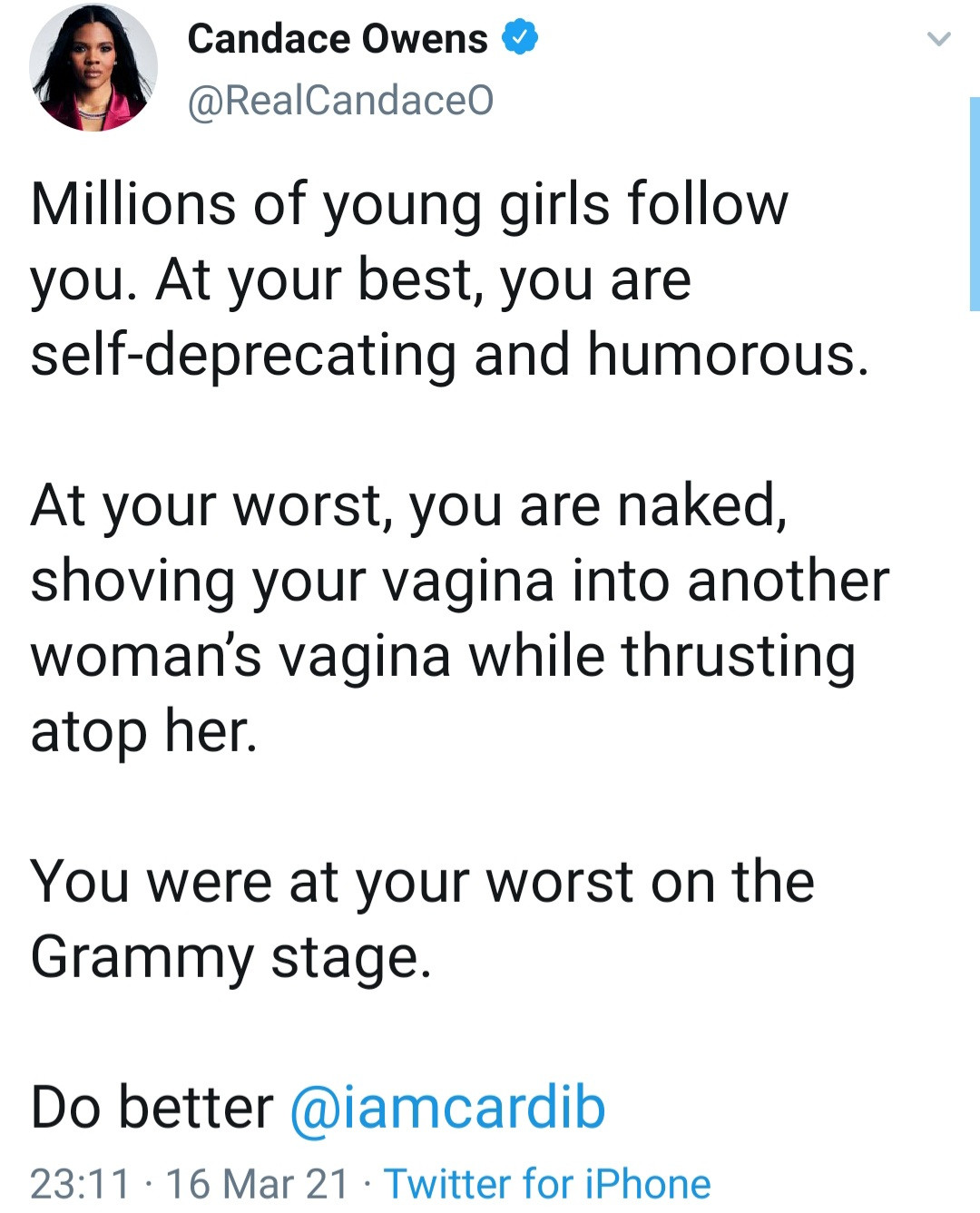 Cardi hit back by releasing a screenshot of an old tweet, purportedly shared by Candace in 2020, admitting her husband cheated on her with her brother. 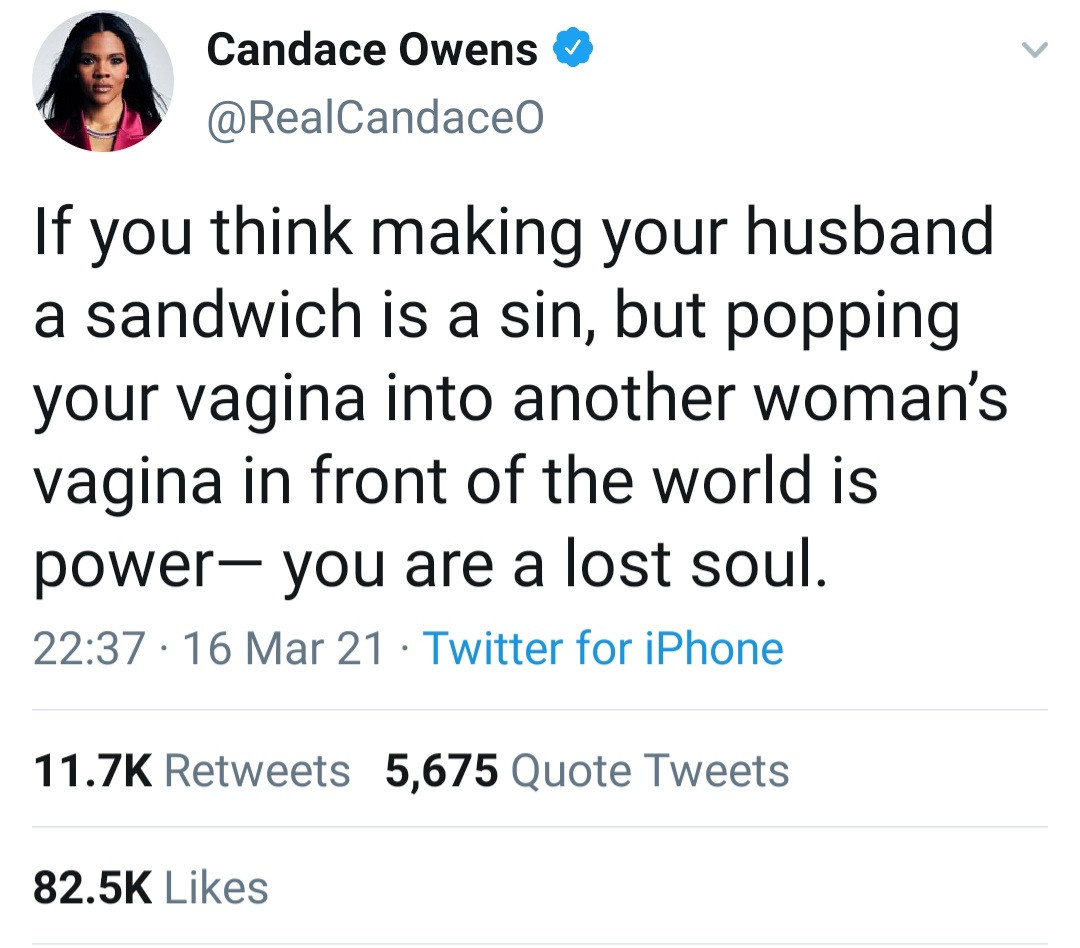 “Not you talking about two women thrusting their vaginas together while your husband and brother slap cocks and balls together,” Cardi captioned the screenshot. 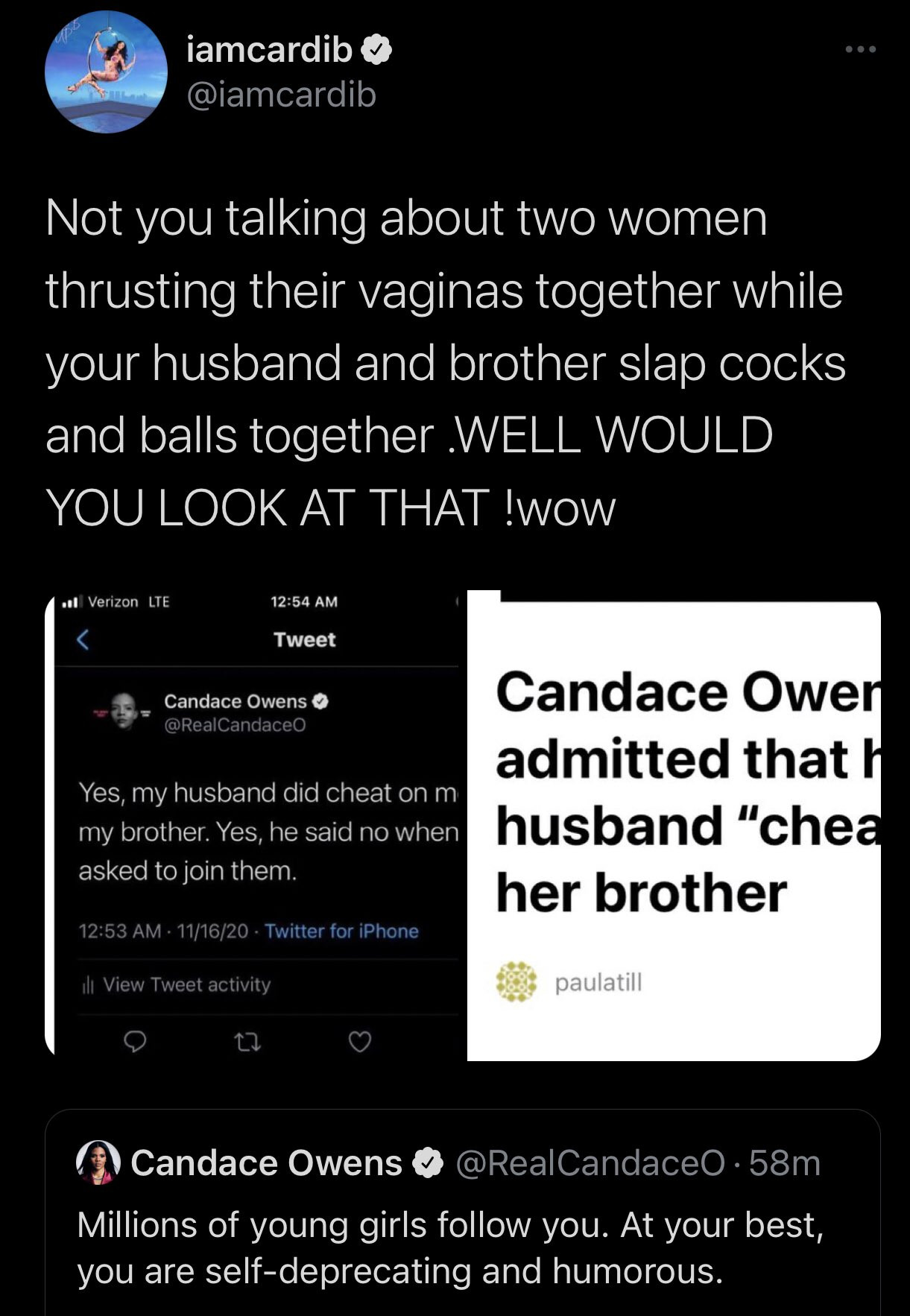 Candace then accused Cardi of photoshopping the tweet and threatened to sue. 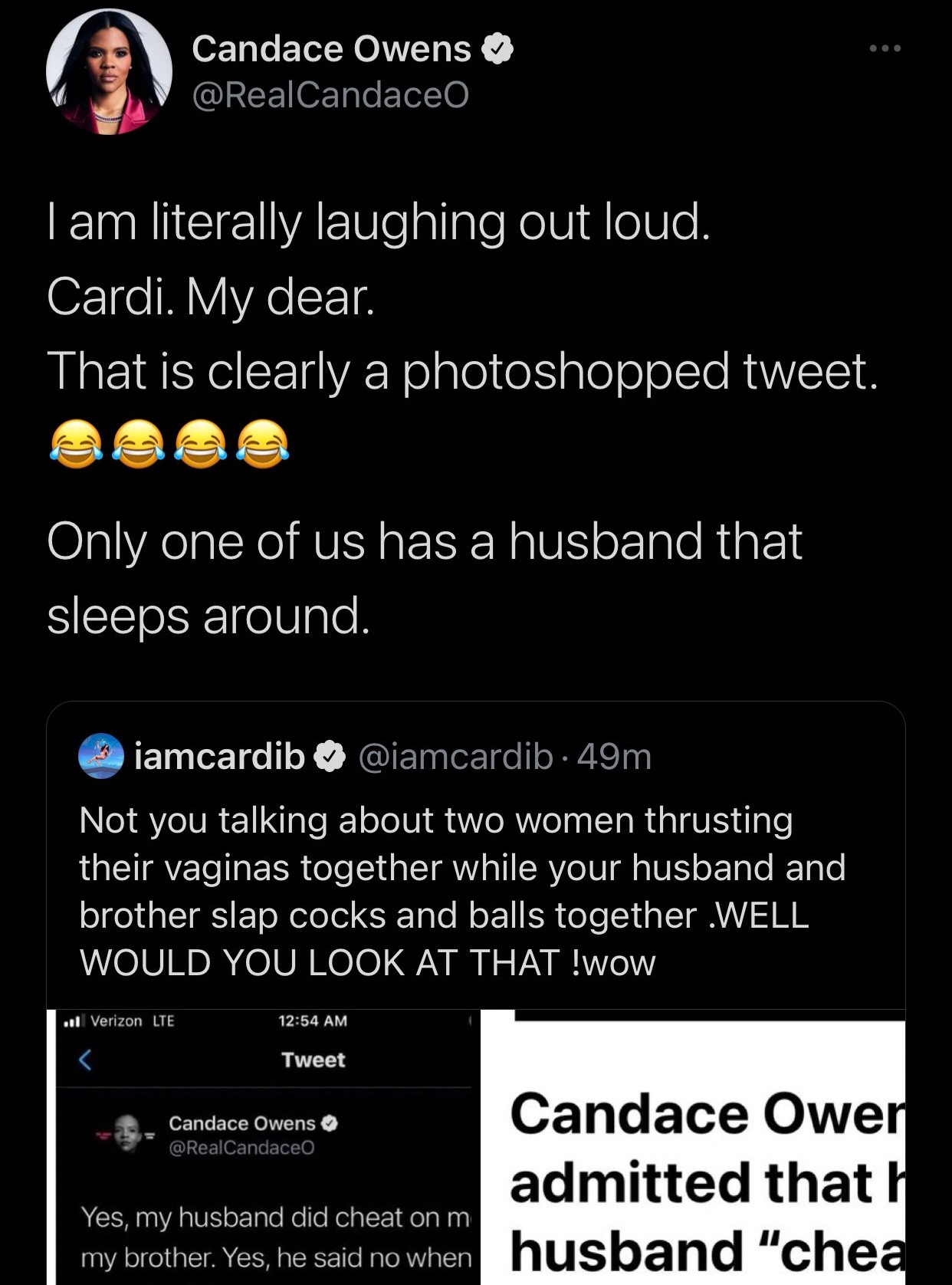 Cardi responded by releasing screenshots of blogs carrying the same tweets back in 2020, to deny reports she photoshopped it. She added that she will also sue Candace for accusing her of photoshop. 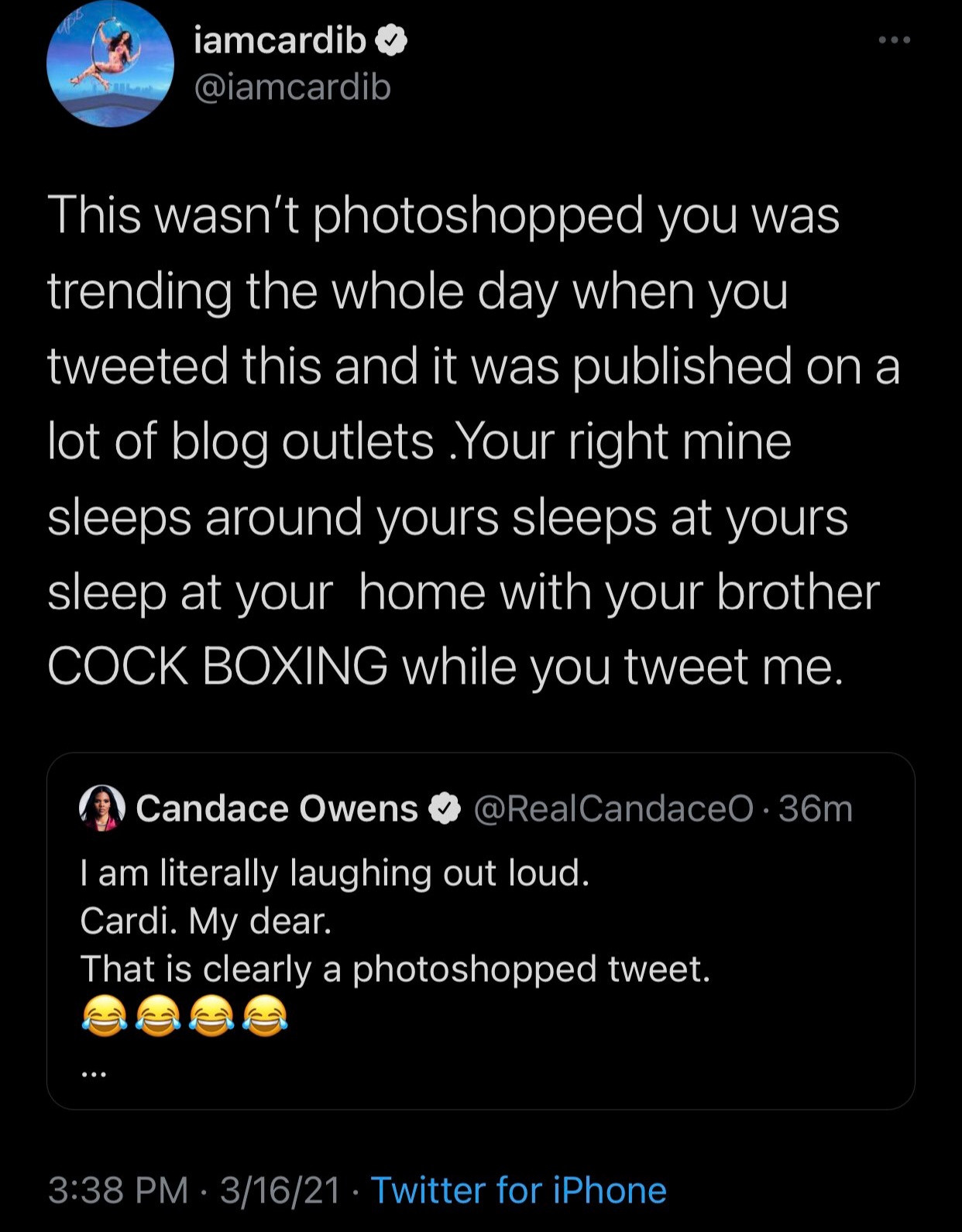 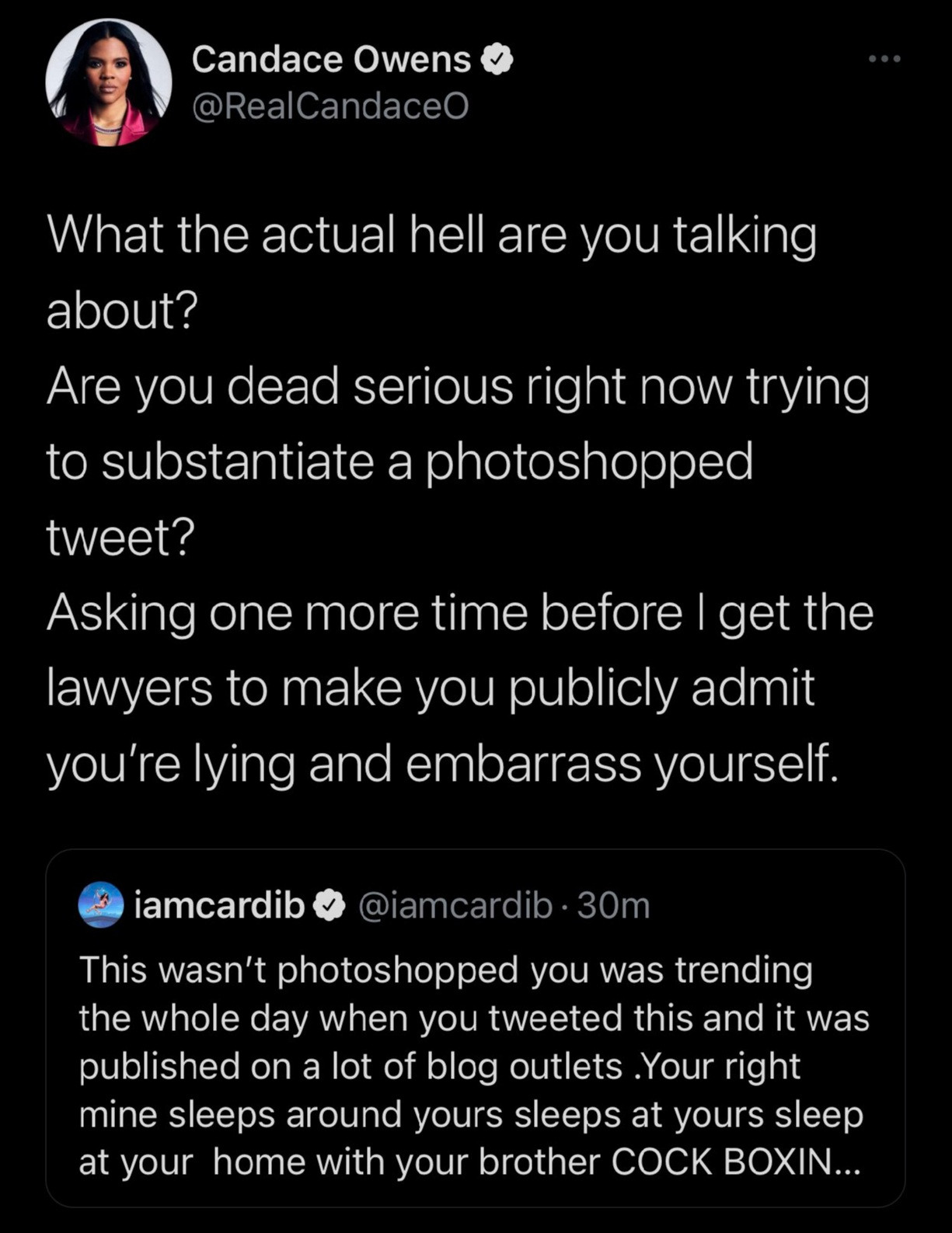 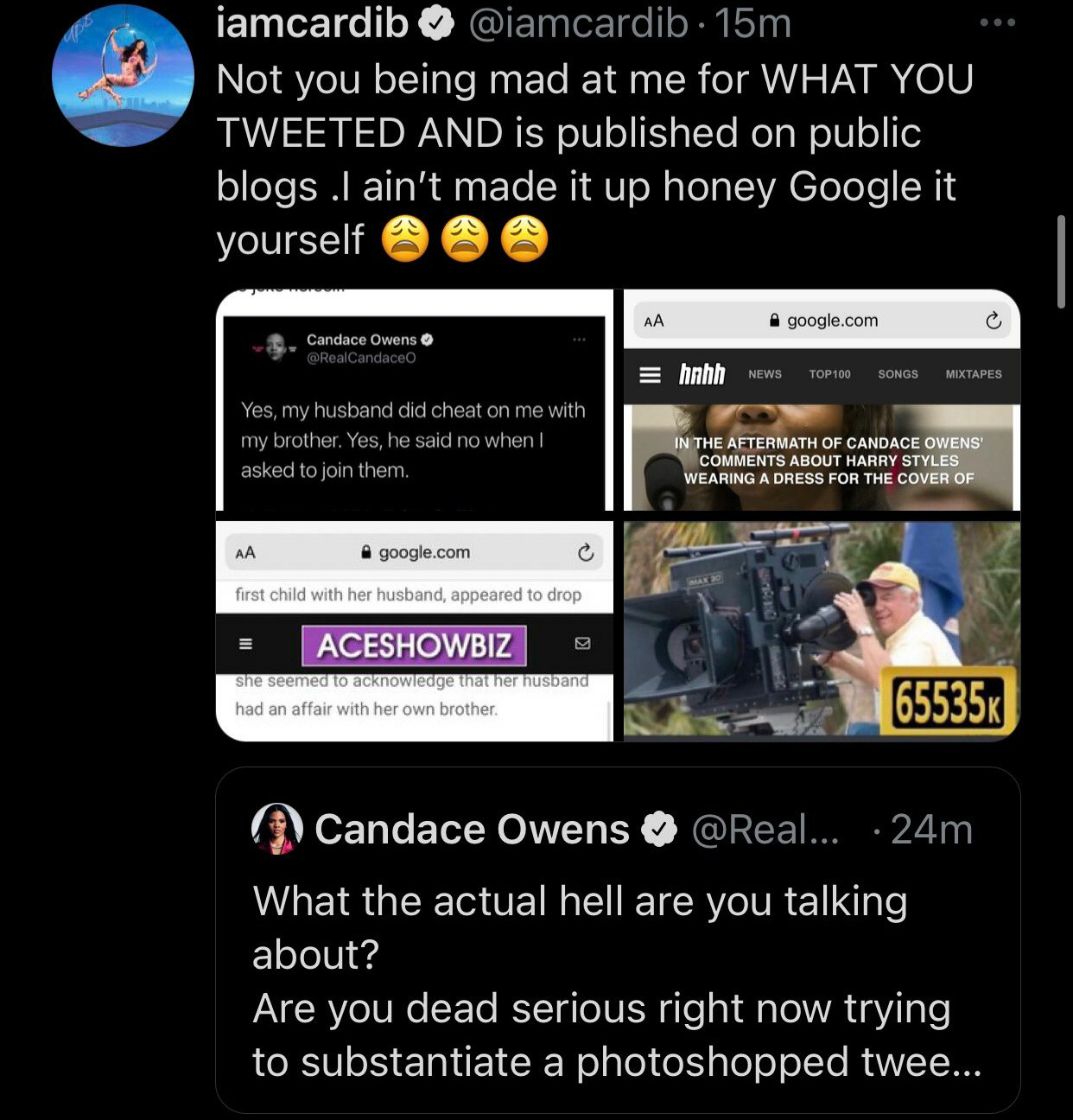 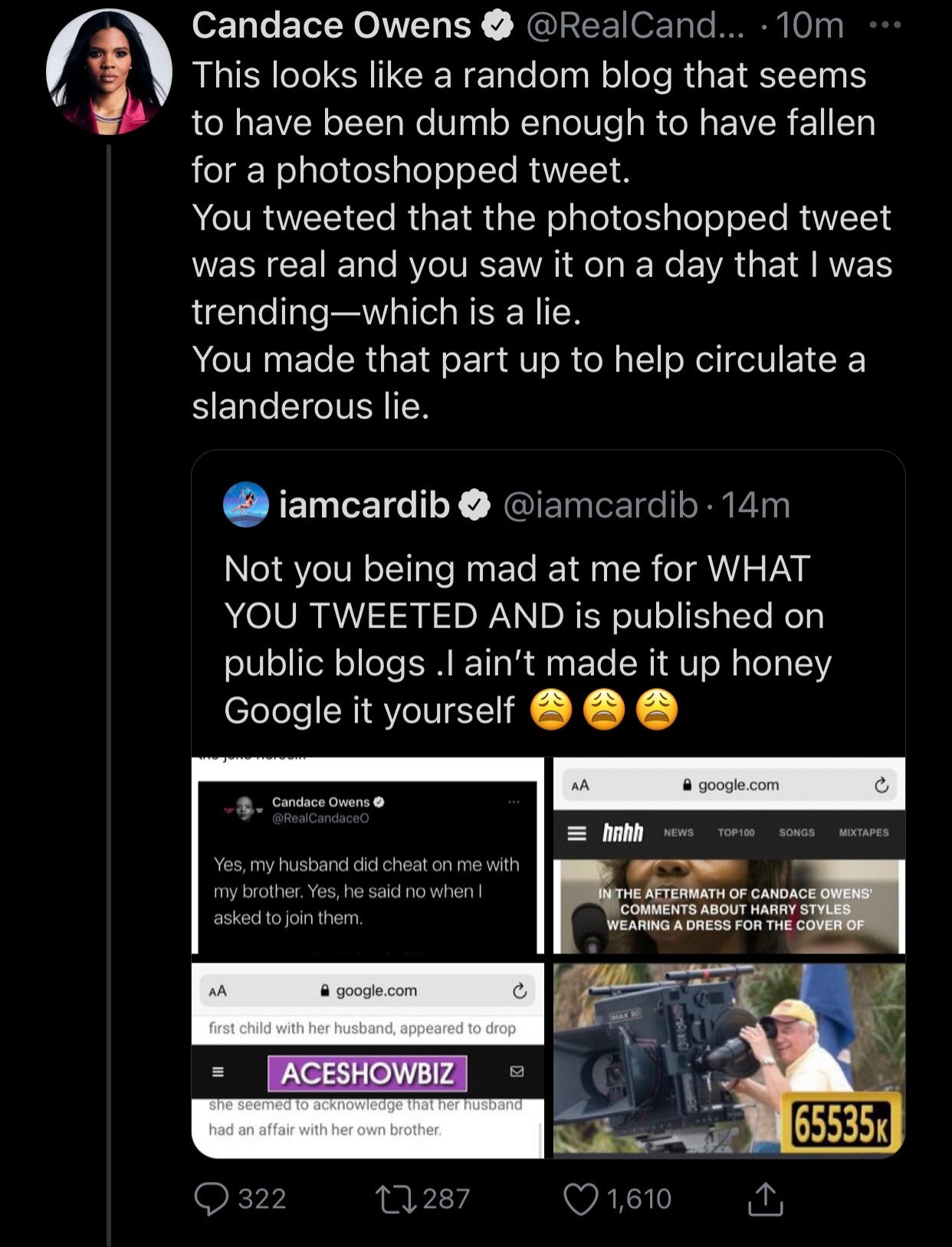 Candace then took to Instagram to release a 13 minutes video addressing her beef with Cardi B, while still threatening to sue Cardi for sharing the “photoshopped” tweet. 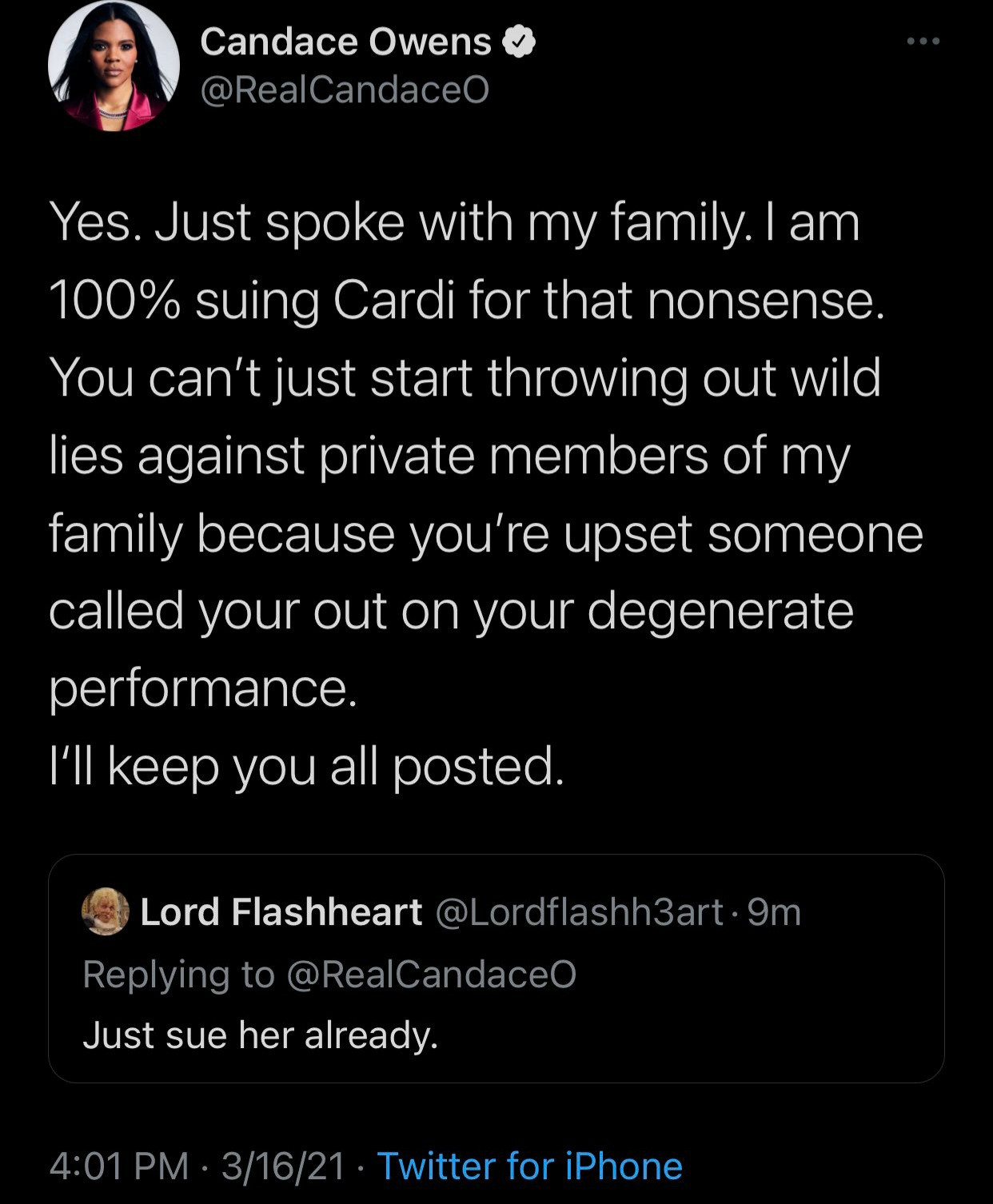 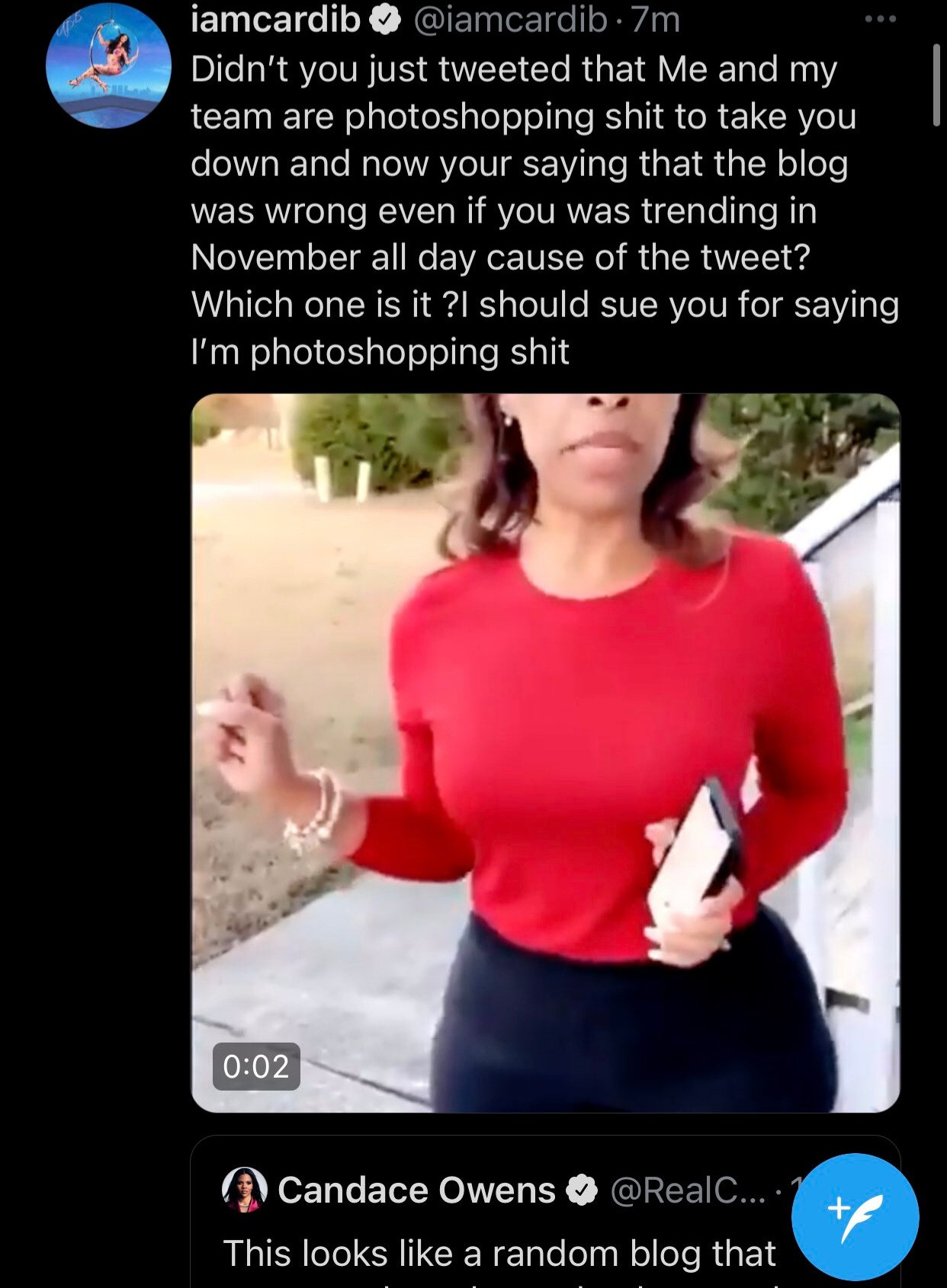 Below is a short clip from the video of Candace threatening to sue Cardi and more tweets from both women blasting each other in a fight that has lasted for two days.