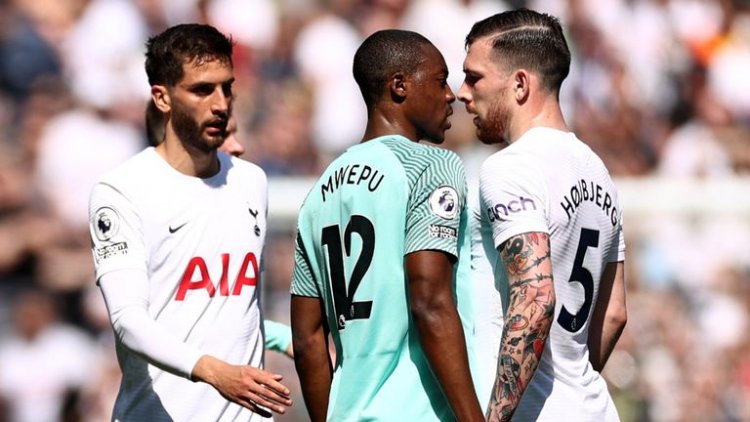 Spurs were sluggish during a stop-start game on Saturday and were eventually undone by Leandro Trossard's 90th-minute winner, having failed to land a single shot on target themselves during the match.

While chances were in short supply at either end, there was first half controversy when Spurs' Dejan Kulusevski swung an elbow at Marc Cucurella and was only booked, and Brighton's Enock Mwepu, who had already been shown a yellow card, escaped further punishment when he was penalised for a high boot on Ben Davies and stood on Pierre-Emile Hojbjerg's boot.

Tottenham lost Matt Doherty for the season during last week's win at Aston Villa when he suffered a medial collateral ligament injury from a tackle from Matty Cash and Conte says officials must be alert to moments when players take man and ball in tackles.

"Sometimes I think the referee has to pay more attention to protect players," Conte said in his post-match press conference, when asked whether about Doherty and 'big tackles' from Brighton.

"I understand you go and you take the ball but if you go to take half ball and half body and you make damage to the player, it's not the same.

"I think for the safety of the player, the referee has to pay great attention, to understand.