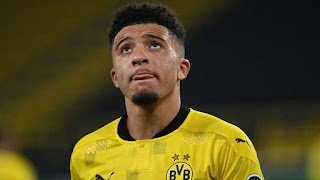 Manchester United have had an opening bid of  £67 million ($95m) rejected for Jadon Sancho.

The England international is one of Ole Gunnar Solskjaer’s top targets this summer after a deal failed to materialise for the 21-year-old last year due to a gap between the two sides over valuation.

Solskjaer is still keen to strengthen the right-wing and discussions have been ongoing with Sancho’s camp and Borussia Dortmund over a potential transfer, with the former Manchester City man keen on a move.