A journalist, Ayoola Babalola, has been allegedly arrested by officials of the Department of State Services, for allegedly publishing articles criticising President Buhari’s administration and also the national leader of the All Progressives Congress, Bola Tinubu as well as the EFCC.

Human rights lawyer, Inibehe Effiong, who is the legal representative of Babalola, made this known in a statement he released on social media.

According to the lawyer, Babalola was arrested on Thursday January 23rd and arraigned before the Magistrate court Abeokuta on Friday January 24th and later remanded in the Ibara Mximum prison Abeokuta.

Inibehe said Babalola was arrested for publishing articles which were deemed critical of President Buhari, APC National Leader, Bola Tinubu and the EFCC.

Read his statement  below

Late on Friday, 24th January, 2020, I was alerted that my client Mr. Ayoola Babalola, a courageous student activist and young journalist, was arrested and charged to court for allegedly publishing certain articles in a Campus Newspaper called GAPOSA Trumpet in which he served as the Editor.

The said articles which were deemed critical of President Buhari, APC Leader, Sen. Bola Ahmed Tinubu and the EFCC also led to the dismissal of a lecturer of Gateway Polytechnic who served as the Producer of the campus newspaper.

He was arrested on Thursday in Abeokua by the State Security Service (SSS) and taken before a Magistrate Court on Friday.

His appeal to the SSS for him to be allowed to contact me as his counsel was rebuffed. Mr. Babalola was only able to contact me through a third party from the Ibara Maximum Prison in Abeokua where he was remanded by the court.

I understand that he was arraigned on a six count charge bothering on alleged incitement, conduct likely to cause a breach of the peace and so on for allegedly publishing critical articles against President Buhari.

The said articles also related to the travails of the leader of the RevolutionNow movement, Mr Omoyele Sowore, and student activist, Comrade Femi Adeyeye.

Before his secret arrest and arraignment, Mr. Ayoola briefed me over repressive actions which he believed Gateway Polytechnic may likely take against him over the articles that he published.

Mr. Babalola also intimated me that the SSS were possibly trailing him because of the said articles.

I condemn this despotic and needless actions by the SSS. It is a shame that at a time the country is battling serious security challenges, the SSS rather than protect Nigeria, is paranoid about any form of criticism against the Buhari regime.

The SSS has continued to expose the country to public and international ridicule over its flagrant violation of the rights of Nigerians and shameless disregard for the rule of law and democratic ethos.

The SSS will not be allowed to turn Nigeria into a police state. We will face them squarely in court.

All legal options will be explored to secure the release of Babalola and safeguard his legal and constitutional rights.

Tyranny will not win. 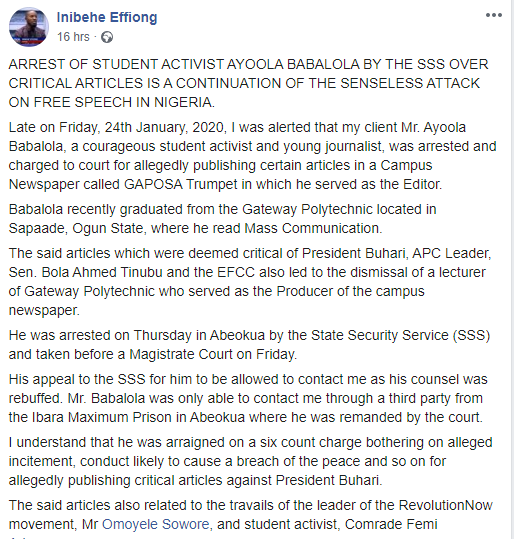