The EFCC has requested Bola Tinubu’s asset declaration documents from the Code of Conduct Bureau, in a politically-charged inquiry that could see the former Lagos governor and ruling party chieftain arrested and prosecuted before 2023.

The anti-graft office in November 2020 asked the asset fraud investigation office to supply details of Mr. Tinubu’s asset documents as part of an ongoing probe of the politician, according to a copy of the request obtained by the Gazette. The request, dated November 6, was a follow-up to previous demands made with respect to Mr. Tinubu’s asset filings.

In the letter, the EFCC referred to its previous letter of September 4, 2020, and CCB’s response of October 9, 2020, asking the bureau to supply “outstanding requested information of Bola Ahmed Adekunle Tinubu.” It was not immediately clear whether or not the CCB has obliged the EFCC’s request for additional information ever since, or the nature and scope of information provided if applicable.

The EFCC’s November 6 memo also included another high-profile politician and Buhari administration official, but the Gazette’s lawyers advised that his identity should be protected until our reporters and editors have established why he was being investigated.

Respective spokespersons for the EFCC and CCB did not return requests seeking comments about Mr. Tinubu’s investigation as led by Abdulrasheed Bawa when he was the head of Lagos zonal office. Mr. Bawa was confirmed as the chairman of EFCC last week despite being a subject of a smothered corruption probe, and officials said he is now fully in charge of Mr. Tinubu’s case.

A spokesman for Mr. Tinubu did not return calls and messages seeking comments, but two associates strategising for the former governor told the Gazette he had already learnt of the probe and sent messages to President Muhammadu Buhari for mercy.

“Asiwaju Tinubu contacted the president some weeks ago to protest that his hands are clean of any dubious practices,” the source said under anonymity to avoid damaging his relationship with the Lagos heavyweight.

“He told the president that if the EFCC must proceed with its probe, then it has to do so with compassion and fear of God.”

“But what Ashiwaju really wants is for the investigation to stop because we all know it was instigated by Abubakar Malami to harass and persecute the party leader and destabilise him before 2023,” the source said.

Another source close to Mr. Tinubu said he recently heard the politician complaining about the influence of the attorney-general on the Buhari administration.

“We were together and I heard it when he said Malami wanted to become the kingmaker in the APC,” the source said. “He also said Malami does not have the intellectual strength to direct the affairs of a ruling party and will not be allowed to kill the party.”

A senior EFCC official familiar with Mr. Tinubu’s investigation said the agency was aided in part by Nigeria’s adoption of a financial system driven by modern surveillance infrastructure. Mr. Tinubu was already arraigned in 2011 for asset declaration fraud, but the matter was dismissed due to the failure of prosecutors to find enough evidence to substantiate their claim that he operated foreign bank accounts while governor between 1999-2007.

But the EFCC has now found additional information and believed it would successfully nail Mr. Tinubu using the same set of asset documents but with advanced layers of verification. Nigeria has adopted the bank verification number and strengthened its financial intelligence departments since 2011.

“The EFCC has travelled a long distance from 2011 when Tinubu was first prosecuted,” an anti-graft chief said. “Now we are carrying out a tech-driven anti-corruption war.”

The official also said Mr. Tinubu’s alleged asset fraud is only an aspect of multiple counts to be instituted against him by the EFCC.

“We have petitions from a group in Abuja that we should investigate the source of those bullion vans that were driven into his house in 2019,” the official said. “We are also investigating his use of several proxies to collude with governors in Lagos and syphon money from the state.”

In November, the Gazette published bank documents that showed how Mr. Tinubu’ Alpha-Beta was moving the questionable funds it received from Lagos State into other companies linked to Mr. Tinubu, including broadcaster TVC and Lagos metro bus providers.

But EFCC’s ability to prove its case against Mr. Tinubu’s this time could still prove more challenging than officials boasted, especially as he was said to have tucked his deals and assets in complex layers of financial manoeuvring.

Officials could not immediately comment on what Mr. Buhari knew about Mr. Tinubu’s probe, but they expressed confidence that the president would be reluctant to stand in the way of a criminal investigation. 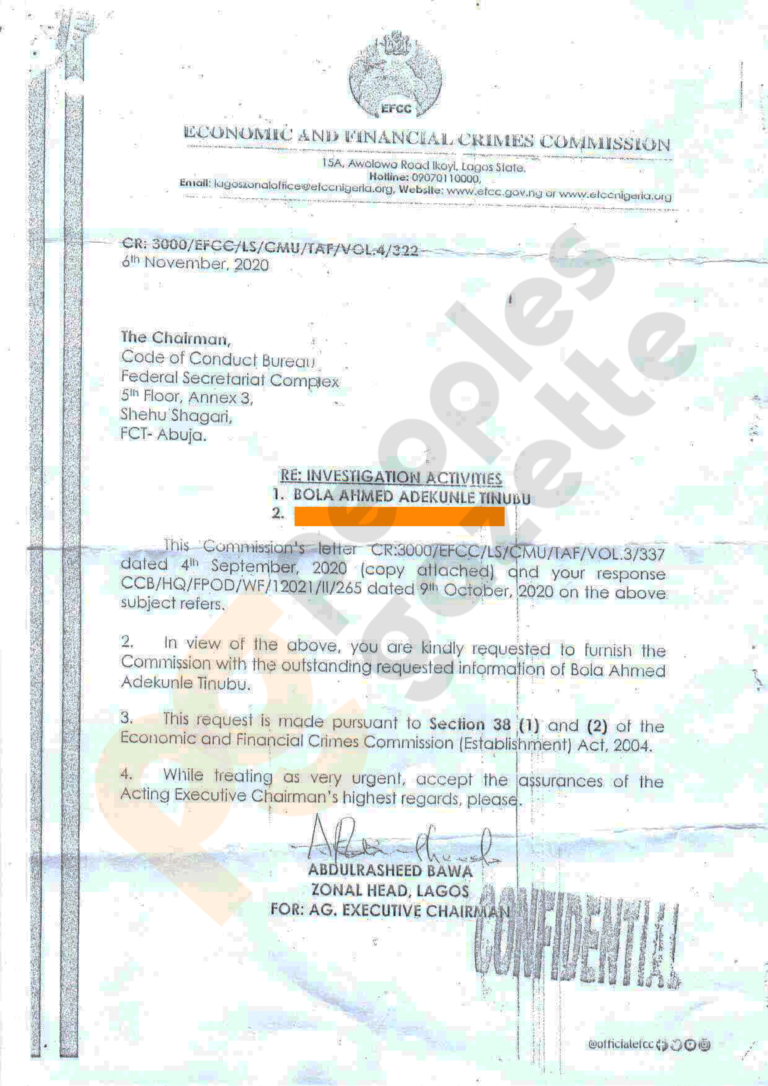