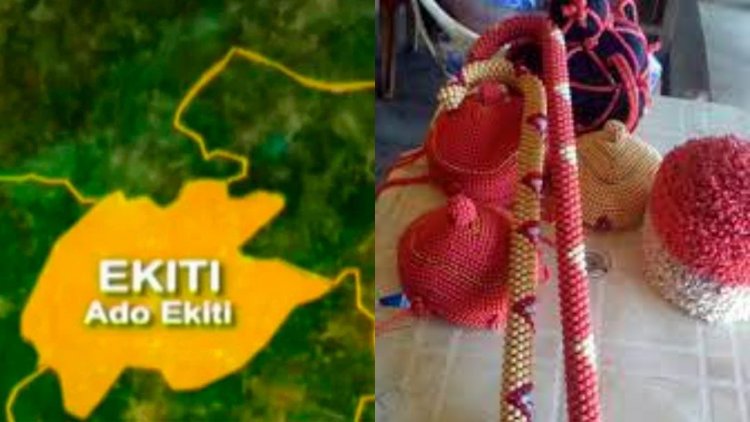 Deputy Governor of Ekiti State, Otunba Bisi Egbeyemi, has warned that any traditional chief or honorary chief who parades himself in the regalia of an Oba will be arrested and prosecuted by the state government to preserve the sanctity of the traditional institution.

Egbeyemi said the riot act became necessary to curb unauthorized use of crowns and beaded walking sticks by palace chiefs in some communities in the state.

According to a statement by his Special Assistant (Media), Odunayo Ogunmola, the deputy governor handed down the warning during a peace meeting with the Olohan of Erijiyan Ekiti, Oba Adegoroye Omoseebi, and interest groups over alleged threat to law and order

The state government summoned the peace meeting following a petition from the monarch that one of his chiefs, the Oba Odo of Erijiyan, Chief Boluwaji Adewumi, has been parading himself with the paraphernalia of a monarch including the use of crown and beaded stick within and outside the state.

Speaking after he was provided photographs of Adewumi with a crown on his head and holding a beaded walking stick, the Deputy Governor said he would have ordered the immediate arrest of the chief but had to give him the last warning and an opportunity to reconcile with the Olohan.

Otunba Egbeyemi said Adewumi’s action was a clear violation of the State Chiefs Law by using the paraphernalia of a monarch which attracts a sentence of six months imprisonment upon conviction.

The Deputy Governor said cases of unauthorized use of crowns and beaded walking sticks have been reported to the state government in the recent past saying such acts are capable of causing chaos and anarchy in the state.

He said the state government is working very hard to ensure that the Land of Honour enjoys peace before, during and after the forthcoming governorship election saying the latest stand-off between the Olohan and the Oba Odo should not be allowed to fester.

He said if the situation is not well handled, it could be hijacked by hoodlums to unleash terror and throw Erijiyan Ekiti into chaos. He called on parties to the crisis to bury their differences in the interest of peace.

He urged the community to effect the arrest of Adewumi through the help of security agencies anywhere he is seen wearing a crown or using a beaded walking stick preparatory to his prosecution in court.

The Deputy Governor, however, used the opportunity to warn chiefs in communities across the state to desist from wearing crowns and using beaded sticks, saying only Obas have the right to use such paraphernalia of office.

He said: “No chief that is under an Oba in our state has the right to wear a crown or use beaded sticks. It is only Obas that are entitled to wear crowns and use beaded sticks. The chiefs can use ordinary walking sticks and not the beaded traditional ones.

“Beaded walking sticks are for Obas only, crowns are meant for Obas only. You don’t have two or more Obas in a town. No chief should parade himself as an Oba no matter how rich or influential he may be. He must respect the Oba under whom he is serving.

“If all of us are using crowns and beaded sticks, there will be confusion in our towns and that amounts to disrespect of our Obas and our government will not tolerate that. If anybody shows contempt for Obas, such an individual is playing with trouble.

“I am by this order putting chiefs in our communities under notice to desist from usurping the authorities of Obas in Ekiti State. Any chief who uses the paraphernalia of Obas is playing with six months imprisonment,” he said.

“I want you (Adewumi) to go back to the palace and beg your Kabiyesi and henceforth cooperate with him for the development of your town. You are a chief under him and don’t do anything that can diminish the throne of the Olohan.”

Speaking earlier, Oba Omoseebi had accused Adewumi of sponsoring confusion and violence in the town which necessitated petitions to the police and the state government.

The monarch alleged that Adewumi has constituted himself as a threat to residents of Erijiyan noting that the palace had to report the incident to the government to prevent a breakdown of law and order.

Adewumi also accused the monarch of making attempts on his life. He added that he only wears a crown once a year during the worship of a river deity in the town.

He assured the Deputy Governor of his readiness to comply with the order and reconcile with the Oba and other chiefs in the community in the interest of peace.