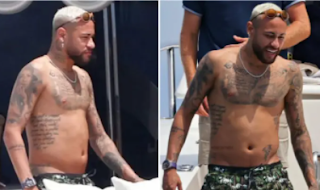 Neymar spent his summer back in Brazil, helping the national team reach the final of the Copa America, losing to former teammate Lionel Messi and Argentina.

The forward is yet to return to PSG training, as he was allowed an extended break, whilst those who have already returned took part in Sunday’s Trophee des Champions.

Whilst Neymar’s teammates were losing 1-0 to Ligue 1 holders Lille in Tel Aviv, Israel, the former Barcelona star was busy sunning himself.

Fans aren’t impressed by what they consider to not be the ideal physique for an elite level footballer, even if he’s still on holiday.

It’s similar criticism to the kind of thing that Eden Hazard used to be hit with, even when he was at Chelsea, and others as well.

Usually what happens is players stop being on holiday, turn up to training and get fit pretty quickly before having no ill effects on the pitch. And Neymar doesn’t even look particularly out of shape.

Arsenal forward Willian was also recently picked out for his physique during the Gunner’s pre season loss to Hibernian last month.

Neymar could yet be joined at PSG training by Cristiano Ronaldo, with reports the Juventus forward wants a move to the Parc des Princes or back to Real Madrid.

Neymar wanted to get out of Messi’s shadow? Look at him now

He ruined himself.. if he stayed with Barcelona we would’ve won 1-2 more UCL’s 🤦‍♂️ pic.twitter.com/W7uE1wll5o

They are really taking good care of Neymar in Paris. Enough food. 👏👏👏 pic.twitter.com/ApLivgVgWe

Neymar from $PSG is a Barcelona Fork ? #Neymar$BTC vs $BCH pic.twitter.com/BcNohLsYKI

Neymar is the new Ronaldo https://t.co/AGFlK3LxhG

I see Neymar is copying the look of his Idol, R9 Ronaldo pic.twitter.com/6IdS43bKgw