Pep Guardiola was booked for his touchline outburst in the second half of Manchester City’s 2-2 draw against Liverpool on Sunday.

The manager was furious when James Milner was spared a second yellow despite appearing to chop down Bernardo Silva. Soon after the incident, Mohamed Salah gave the Reds a lead with a brilliant solo goal, although Manchester City later found an equaliser through Kevin De Bruyne.

Guardiola spent several minutes screaming at officials before being punished and told to sit down. 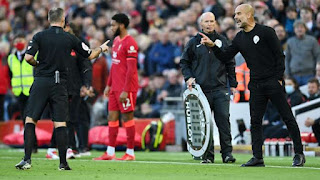