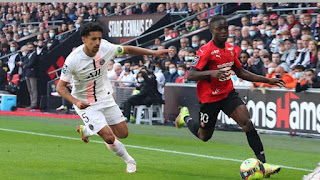 Ghana’s winger Kamaldeen Sulemana recorded an assist as Rennes defeated PSG 2-0 in a Ligue 1 encounter at Roazhon Park on Sunday.

Sulemana’s side registered the victory as Gaetan Laborde scored late in the first half before Flavien Tait added the other goal just as the second half began.

Morocco’s Nayef Aguerd did a better job by restraining an accelerating Kylian Mbappe in the sixth minute as PSG threatened to open the score early.

In the 10th minute, Sulemana led Rennes’ attacks as the play he started ended at Gaetan Laborde’s feet, but PSG’s Gianluigi Donnarumma was alert to thwart the impending danger.

Achraf Hakimi lost the ball inside the penalty area in the 18th minute when PSG counter-attacked but Rennes recovered, counter-attacked too but their move was equally blocked for a fruitless corner.

Idrissa Gueye’s long-distance shot in the 27th minute barely missed the left-post as Rennes managed to keep them far away from their penalty box.