Manchester City manager, Pep Guardiola, has said he failed to bring Harry Kane last summer because Tottenham Hotspur was difficult to negotiate with. However, Guardiola insists he did not â€œstart a fireâ€ when the move fell through. 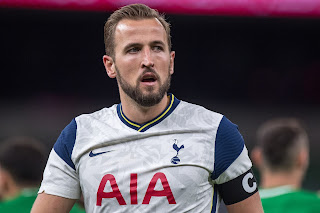 Manchester City manager, Pep Guardiola, has said he failed to bring Harry Kane last summer because Tottenham Hotspur was difficult to negotiate with. However, Guardiola insists he did not â€œstart a fireâ€ when the move fell through. City is still on course to win the Premier League title as they hold a nine-point lead over second-placed Liverpool, having scored 61 goals in 25 games. However, there were questions at the start of the season, after they failed to score against Leicester and Spurs, who they play on Saturday. Guardiola has now confirmed City tried to lure Kane away, but Spurs were clear in their stance. â€œI never was, in my 11 or 12 years, disappointed in what the club cannot do in the transfer market. â€œIâ€™ve never created a fire here because I represent the club and the club is always beyond myself by far. â€œWe tried [to sign Kane] but it was far away to be done because Tottenham was clear this is not going to happen. And when it happens two, three, four times, itâ€™s over. â€œThe club gave me players and Iâ€™m always delighted â€“ and itâ€™s then what we can do together. Maybe if we had a proper striker we would play with a striker but with the players we have, we have to adapt,â€ Guardiola told a press conference on Friday. Without a recognised striker, City has shared the goals around this season, with Riyad Mahrez, Raheem Sterling and Bernardo Silva all hitting double figures.

Nigeria vs Ghana: It is very tough to be Super Eagles coach...