Skip to content
The Catalan coach is now chasing down Champions League glory, with it his opinion that the Blues can get even better under his guidance

Pep Guardiola has warned that a third Premier League title, and potential Champions League win, will not satisfy his addiction to success, with the Manchester City boss of the opinion that his side can get even better.

Two legs of a potential treble have been completed by City this season, with another top-flight crown secured on the back of a fourth successive Carabao Cup triumph.

European glory is now there to be shot at, ahead of a heavyweight clash with domestic rivals Chelsea on May 29, and Guardiola is looking to take his team to even greater heights in the years to come. 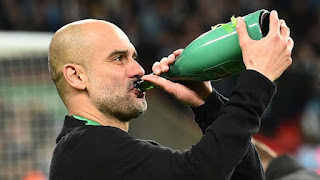