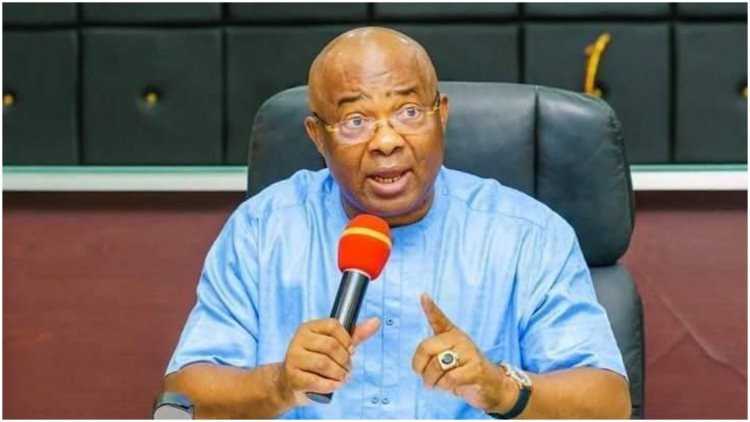 Imo State Governor, Hope Uzodinma has revealed a new twist to the recent gunmen attack on officials of the Independent National Electoral Commission INEC, in the state.

The gunmen had killed an INEC official while some locals sustained various degrees of injuries during the attack.

According to Uzodinma, the actual target of the gunmen, some of whom have been arrested by security agencies and are giving useful information, was the correctional centre at Okigwe but they resorted to attacking the INEC team when they realised their evil plot had been busted.

Uzodinma who was at the Presidential Villa Abuja, to brief President Muhammadu Buhari on the security situation in his state, insisted that the opposition group were behind the incessant attacks both in Kaduna and Ebonyi States.

The deceased INEC staff was killed while supervising the continuous voter registration exercise in the state.

In the video which went viral, the gunmen were heard telling the electoral officials that they do not want any election in the state.

While the State government believes that the atrocities are being perpetrated by the opposition, some others alleged that the attacks are being stage-managed by the ruling party themselves.

Uzodinma said, “the incident that happened that involved INEC staff, regrettably INEC was not the target. We had the intelligence that the Correctional Center in Okigwe was to be attacked by bandits.

“We recorded their conversation and fortified the Correctional Center for safety. And true to it, the bandits approached Okigwe, saw how fortified the place was and tried to escape through Izibugwu and ran into INEC staff, while they were doing continuous voters registration. It was out of that anger and frustration that they attacked them.

“You may have heard that two of the bandits have been arrested and are helping the Nigerian police and Imo State government to do a very thorough investigation and until that is done, I will not say much on that.

“Then on the issue of the sponsors of banditry by APC. I want us to look at the issue of banditry in Nigeria holistically. If anybody’s telling you that the government in power is sponsoring banditry, how and why?

“How can anybody even think of a government sponsoring banditry in a country that they are in charge. If that is correct, assuming that is a possibility. How many states governed by opposition parties are under this kind of attack that we’ll hear from Kaduna every day. That we get from Imo State every day, that we get from Ebonyi State.

“So if we are the ones, why are we attacking our own states? Why are we going to be enemies and opposition to our own governments? Among those that have been killed and houses that were attacked, how many of those buildings belong to the opposition party? Am I supposed to be attacking or burning down my own house? Or do you think the Ebonyi governor will burn down his own house? Or the Kaduna governor will burn down facilities in his government.

“So we should be able to ask questions, not only as media practitioners but as Nigerian citizens. I just use this medium to call on Nigerian politicians to click play politics without bitterness and stop letting blood here and there in the name of looking for power.

“I am no longer in doubt, as to who the sponsors of banditry in Nigeria are. Those who want to make Nigeria ungovernable cannot be the people governing Nigeria, currently. After all, we don’t have an election this year. The election should start by next year. So for completely one year, the APC government is in power and will not encourage any disruption. So I think we reason and begin to think better than we’re currently doing. Nigerians should be more patriotic, our national interest should be uppermost in our minds”.

Street children in Southwest will be worse than Boko Haram if not checked – Islamic...