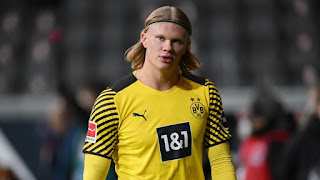 Erling Haaland has said Borussia Dortmund are strongly pressuring him to make a decision on his playing future.

Haaland has been linked with a big-money move to a host of Europe’s top clubs after proving himself as one of the world’s top strikers at age 21.

Speaking after he scored twice in Dortmund’s 5-1 win against Freiburg on Friday, Haaland admitted he was unable to fully focus on football amid the pressure campaign from his club.