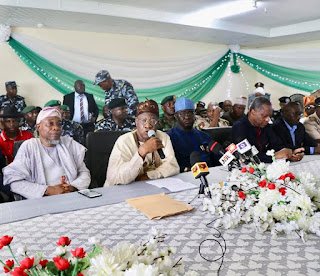 The Federal Government has listed higher import revenue, lower domestic fuel consumption and increased rice production by local farmers among the gains of the closure of the country’s land borders in four geo-political zones of the country.

The Minister of Information and Culture, Lai Mohammed, announced the gains when he visited the Seme Border on Monday, along with Minister of Foreign Affairs Geoffrey Onyeama; Minister of Interior Rauf Aregbesola, Minister of State for Finance, Budget and
National Planning Clement Agba, National Security Adviser Babagana Monguno and the Comptroller General of the Nigerian Immigration Service Muhammed Babandede

He said since the closure, the monthly import revenue has increased by 15%, instead of dropping as expected in many quarters, while the local consumption of fuel has dropped by 30%, apparently due to reduced smuggling of the products to neighbouring countries

Alhaji Mohammed also said the closure has so far curbed the smuggling of foreign rice into the country, in addition to other prohibited items.

”There has been an enhanced production and milling of Nigerian rice. Patronage of Nigerian rice has also increased and farmers are expanding their farms as well as engaging more hands” he said.

He also said 296 illegal immigrants have been arrested.

”It is important to note that 95 percent of illicit drugs and weapons that are being used for acts of terrorism and kidnapping in Nigeria today come in through our porous borders. However, since this partial closure, these acts have been drastically reduced. Our conclusion is that the arms and ammunition these terrorists and criminal elements
were using no longer gain access into the country. In addition, the importation of the drugs which affect the well-being of Nigerians have equally been reduced,” he said

He said Benin and Niger are not yet doing enough to ameliorate the challenges that led to the border closure, adding that the magnitude of seizures and the number of illegal immigrants recorded in the last two weeks alone confirm this assertion..

”As we speak, we have ships loaded with rice waiting to discharge (in Benin) and the target market is Nigeria (for Christmas). We have (MV Africana Jacana with 40,000 metric tons of rice, MV Zilos with 20,000 mts and MV Sam Jarguar with 45,000 MTS and others,”Lai Mohammed said.

He said the border closure would not have occurred if Nigeria’s neighbours had complied with the various MOUs as well as the ECOWAS transit protocols, including the ECOWAS Trade Liberalization Scheme (ETLS).

”Discussions on doing legitimate trade between Nigeria on one hand and Benin and Niger on the other, started in 2005. The discussions have led to MOUs in 2005, 2014, 2015, 2016, 2017 and 2018, all designed to facilitating free movement of goods manufactured in their respective countries and work out the modalities through the Ministers of Trade of both countries for the realization of this objectives.

”It worth noting that there has never been legitimate transit trade between Nigeria and the two countries (Benin and Niger) For clarity, the ECOWAS protocol on transit demands that when a transit container berths at a seaport, the receiving country is mandated to escort same without tampering with the seal to the border of the destination country. Unfortunately, experience has shown that our neighbours do not comply with this protocol.

”Rather, they break the seals of containers at their ports and trans-load goods destined for Nigeria from the original container to trucks. In most cases five containers loaded onto one truck and duty paid as one truck. This improper trans-loading of transit goods makes
it impossible to properly examine such goods, resulting in importation of illicit goods, including arms and ammunition, without being detected. Because goods are not examined, mis-classification and resultant loss of revenue become the ultimate consequence of this
illegitimate transit trade” Mohammed said