Skip to content
The Nigerian looks reinvigorated under new head coach Unai Emery and will hope to build on his good form this season. 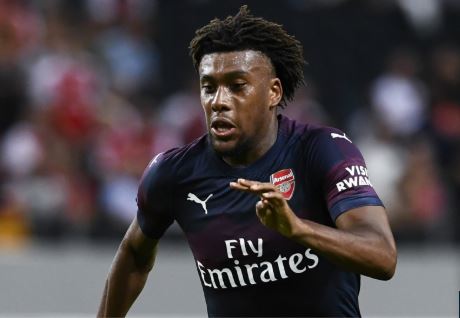 Alex Iwobi
Alex Iwobi knows all about pressure. He signed his first professional contract at the age of 18, was nominated among the top 50 youngsters in world football two years later while he made his international debut for Nigeria in 2015.
His path to the top is still continuing and after a couple of underwhelming seasons which can be put down to a mixture of inconsistency and instability, the 22-year-old appears to be finally flourishing under new head coach Unai Emery.
Former Gunners boss Arsene Wenger set Iwobi a target of 10 goals and ‘5 or 6 assists’ last season after admitting that the forward needs to improve on his final ball and goalscoring statistics. Iwobi, whose most impressive games this season have come away to Chelsea at Stamford Bridge and in the recent 2-0 win over Watford, has lauded Emery’s intense training methods as the reason why he is starting to flourish as a player who can make the difference in the final third.
“I’m working every day in training. The main thing the boss stresses with me is to get into those positions to score,”he said.
“He’s happy with me getting into those positions and the next step is converting the chances. I’ve lost a bit of weight because of the intense training, and it’s made me a bit sharper.”
Laurent Koscielny recently said that Iwobi “needs to realise how good he can be” and confidence remains the key facet for a professional footballer alongside their technique. Without self belief in one’s own ability, the opportunity to showcase true talent on the pitch is limited – and it’s something Iwobi has been tasked to improve on since he broke into the Arsenal first team.
“The boss basically told me that if something doesn’t work, just to keep going and don’t dwell on it,” he added.
“He’s told me to stop being so critical and to just keep trying no matter what happens, no matter if things don’t go as I want them to.
“That’s given me a lot more confidence to try a few more things, like beat a player, to shoot more. I’m always ready to get on the ball a bit more. I’m more positive and confident with the ball.”
Mesut Ozil, Pierre-Emerick Aubameyang and Alexandre Lacazette are mainstays of the attack under Emery but there is a feeling that Iwobi could displace Henrikh Mkhitaryan from the team if he continues to impress on a consistent basis. He may not be a natural wide threat, but his unorthodox style and link up play with the other forward players could see him given more chances in the first team this season.
It’s certainly clear that the talent is there. At national team level Iwobi is not shy in front of goal and his place in the starting line-up is rarely questioned. If he can transform that form to club level, which he appears to be doing this season, then it won’t be long before he’s a regular for club and country.
Despite only scoring once in six games for Arsenal this season, Iwobi’s overall contribution to games is being recognised due to the unique qualities he brings up top. His ability to run directly at opponents while producing a burst of pace and change of direction give him the platform to score and create, although it is unclear which position Emery sees the Nigerian’s future in.
Iwobi has previously said that when you have a lot of self-belief you start to take risks and do things you know you’re capable of. At such a crucial stage in his career it is refreshing to see a player taking ownership of his own game and, while he hasn’t reached the level he would have wanted just yet, the signs so far are promising.