the ruling of a High Court of Justice in Asaba, Delta state does not refer to him, but Delta State Chairman of the party.

Buni, while reacting to the judgement on Thursday through his Spokesman, Mamman Mohammed noted the restriction of the forthcoming ward congress as imposed by the court is limited to Delta State and does not affect other states.

He said Mr. Elvis Ayomanor and seven others on 19th August instituted a case against the APC and its leadership in a High Court of Justice, Asaba, Delta state, challenging the outcome of the party’s ward Congress of 31st July, 2021.

“The seven applicants prayed the court to among other things issue and service the originating summons on 15 defendants including the party, the Chairman Caretaker Extraordinary Convention Planning Committee and members as well as, the Chairman of the party in the state.

“The applicants also sought the court to issue an interim injunction to restrain the chairman and members of the Caretaker Extraordinary Convention Planning Committee from acting or parading themselves as leaders of the party pending the determination of the case against the outcome of the ward Congress in Delta state before the court.

“They also prayed for an interim injunction restraining the party from conducting the local government and state government Congresses slated for 4th September in Delta state pending the determination of the case before the court”, he said.

He then quoted that, the High court in its wisdom ruled, “This court has looked at the motion Ex-Parte dated 18th/8/2021 and filed 19th/8/2021 seeking the reliefs as set out on the face of the motion paper. This court has also looked at the supporting affidavit along with exhibits attached as well as the written address containing legal arguments in support of the prayers sought. Reliefs 1, 2, 3 and 4 have to do with issues of service of processes on all parties in this suit. Relief 5, 6 and 7 are injunctive reliefs being sought in the interim. The affidavits in support contain sufficient grounds for the grant of the reliefs being sought. Reliefs 1,2,3,4 and alternative prayer 5 of the motion Ex-Parte are hereby granted. Alternative prayer 5 is granted only in relation to the 15th defendant (Jones Ode Erue, Chairman APC, Delta State). In compliance with order 39 Rule 7(3) of the Extant Civil Procedure Rules of this court, this order of injunction granted shall abate after 7 days. It shall not operate ad infinitum. This matter stands adjourned to 7th September, 2021 by 10.00 a.m on agreement of counsel”.

According to Buni, based on court’s verdict it is apparently clear that the ruling only affected the 15th defendant, which Delta State Chairman of APC and not the National Chairman of the Caretaker Extraordinary Convention Planning Committee and Yobe state Governor Hon. Mai Mala Buni and other members of the committee

“Some mischief makers who never wished the party well, had continued to misrepresent the facts mostly without having access to the court ruling”, he said. 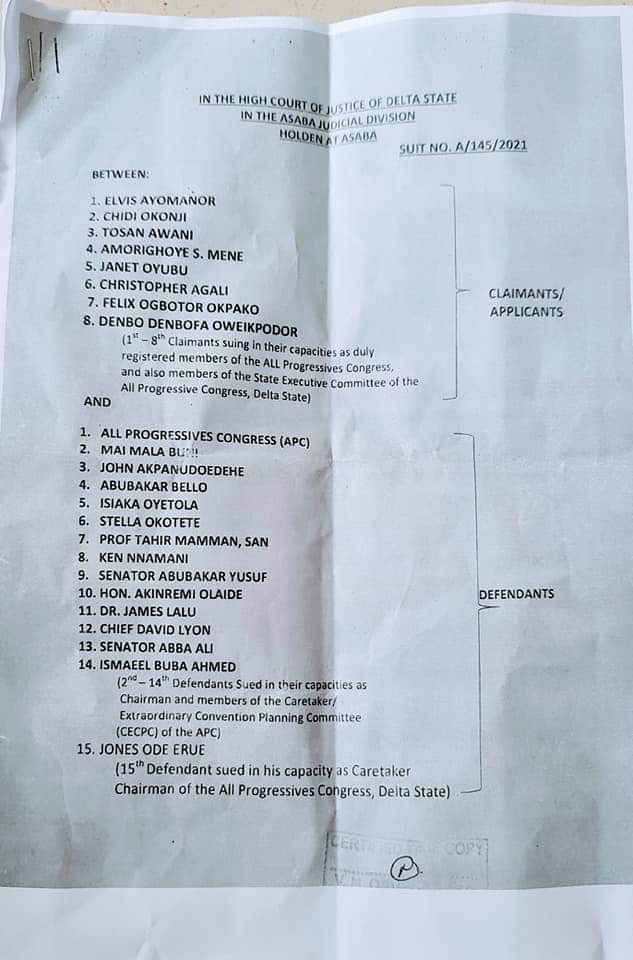 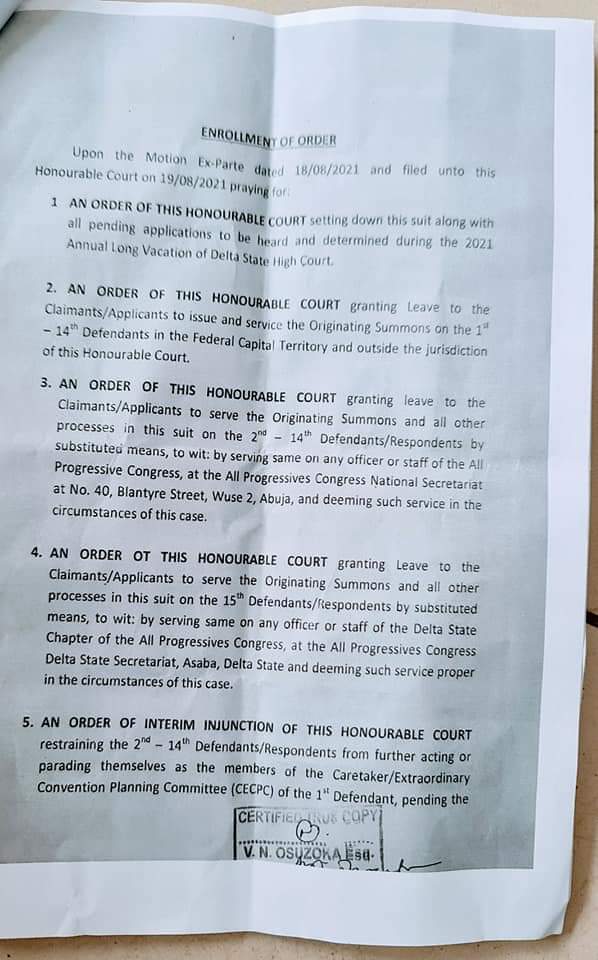 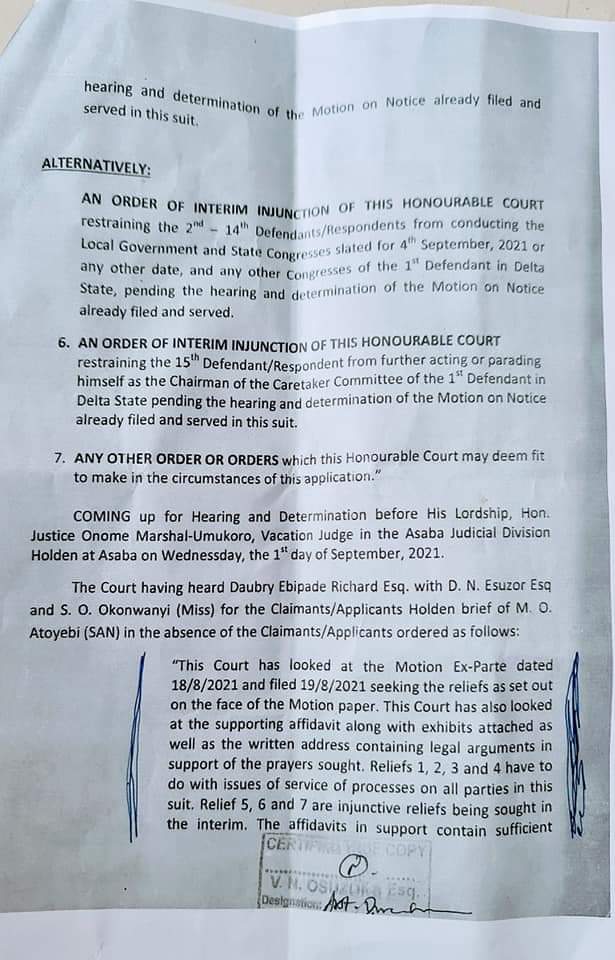 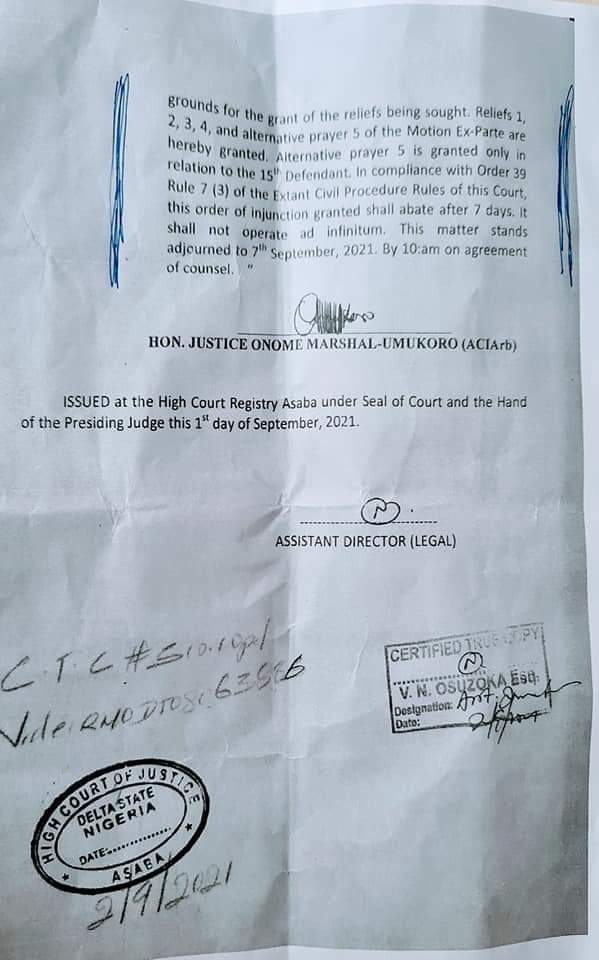