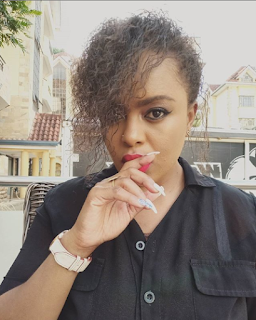 The songstress has lived a life in her music career, no doubt! but she also has a second life back home with family.

‘Music is a jealous lover, or the entertainment industry is jealous. I have wanted so many times to say you know what, I am ending this, and in so many ways, I feel I am in that space.’

The thoughts to call it quits, had crossed her mind, not once, not twice, but numerous times.

A part of it was influenced by her dad’s heart condition that snatched him away from them.

‘My dad questioned a lot while he was sick and it made us question a lot. I got into that zombie state of questioning so much.’

It’s like she had just woken up from some deep sleep. The music queen became more connected to her life and everything around it.

‘You never know what life is going to be but you know there is an end to it. My life started becoming a bit more conscious and awakened, from the time my dad passed on.’

It started with a heart attack. Then things cooled down, only for the tides to return but this time, striking a little bit harder.

‘He just had a heart attack and we thought he was going to be okay, then all of a sudden, he was not okay and he had a second heart attack, which was a bit more severe.’

And just like that, her dad was no more, barely 50 years of age yet so full of life, things just didn’t add up.

‘He wasn’t old as he had just clocked 50 years and he had a full life ahead of him.’

Fortunate enough, Avril’s management is what has been keeping her on her toes ever since.

‘Sometimes you get to a space where you feel like you want someone to drive you, unlike when you are starting.’

Avril celebrates more than a decade in the Kenyan music scene.