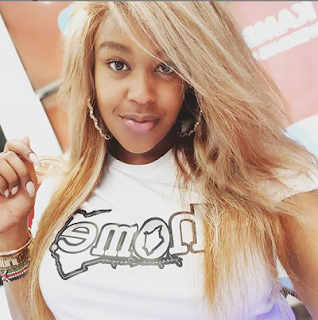 Controversial Kenyan media personality, Kamene Goro set the records straight that she is no lesbian, rather a hetero.

The KISS 100 radio host let her online fans throw in all the wild assumptions they could think of her and she answered them, one after the other.

Surprisingly, she did them all on a light note regardless of the assumption made.

You can guess the obvious ones but her sexual orientation stood out. Despite having a history with a string of men, at least 27 from statistics, someone still assumed she was a lesbian.

By her poolside, Kamene spoke of her sexual liking:

‘I love women. I love you guys. You guys are the best thing in the whole damn world! But not like that. I think we all know where my affiliations lie.’

With the number of men she has bedded now out in the public, definitely, the assumption that she is a f**k girl arose.

And this was her answer:

‘Contrary to popular belief, I’m a full romantic and have some pretty straightforward beliefs about women, men, men and women etc. I am a believer in love.’

A fan then asked whether ‘she gets jealous with her man’, powerfully declaring:

Is she a ride or die?

She received so many questions about being good in bed and this is what she had to say:

From the Q&A, Kamene had articulately put out that once she is in with you, then she fully is and sticks to one.

Unfortunately though, she admitted that men don’t take her seriously and that makes her blood boil.

‘People just be playing with me  and lemme tell you something, every time that happens. Not good! Coz I’m a pretty vengeful person. That never goes right.’

‘Was she getting DMs from men?’ came in next and to your surprise, it turns out that men are ‘intimidated’ by the curvy girl.

‘Not really. I don’t know. They’re kinda sort of afraid of me. They don’t really come like that….’

‘Not really. For me it’s not about looks. For me it’s about how you think, your positioning in my life but more specifically is, how easy are you making my life? Cause you my guy I’m not taking nothing that’s making my life any harder than it is.’

Moving on to her plans of starting a family, the query got Kamene twisting her lips, in a way suggesting that question was either in the wrong place or she just never saw that coming.

But she had zero plans of making replicas of herself.

Finishing off with assumptions that she is 35 and older – while barely at 28 – she confessed that probably her looks defied her age.

#kenyan #mediapersonality #kamenegoro clear the airs as she denied being #bisexual