An Indian woman has died after the police allegedly took her oxygen cylinder away from her hospital bed to give to a VIP amid a shortage of medical oxygen in the country.

Video shared on social media shows a man crying and begging in front of the Uttar Pradesh police not to take away his mother’s oxygen cylinder.

‘My mother will die if you take away her oxygen cylinder,’ Anmol Goyal, 22, told the police as the cylinder was carried out of the hospital on Tuesday night, April 27.

He and his 17-year-old brother were said to have sourced the oxygen themselves, bringing it to the Covid ward and placing it by their mother’s bed.

Their mother, who was admitted to a private hospital in Agra in Uttar Pradesh for Covid-19 complications, died two hours after the police allegedly took away the oxygen.

The cylinder was confiscated by the police for someone deemed to be more important, according to The Times of India correspondent who shared the video on social media. 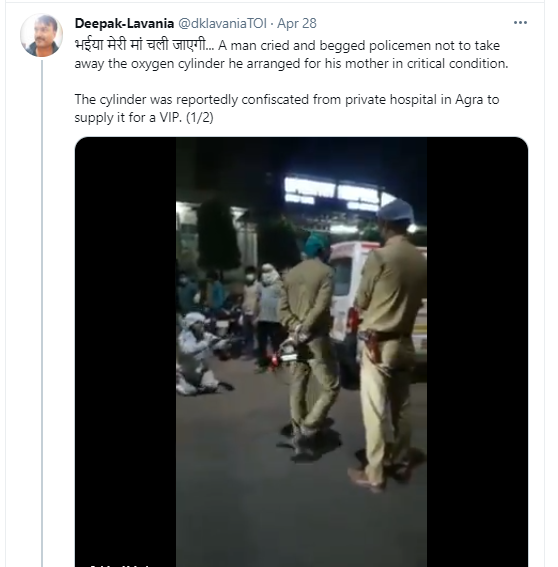 Agra Police have vehemently denied the claims, saying: ‘It was an empty cylinder being taken away from the hospital for refilling.’

Rohan P Botre, Superintendent of Agra Police told the media: “It was an empty cylinder being taken away from the hospital for refilling.”

He added: “Three days ago, there was some oxygen shortage in the district because of which we were helping patients to refill cylinders. The person is crying only because he was requesting the police to help him with a cylinder.”

According to the ministry of health and family welfare data, Friday, India recorded a total of some 386,000 Covid positive cases in the past 24 hours and about 3,498 deaths.

The country has also seen more than 200,000 Covid deaths since the beginning of the pandemic.