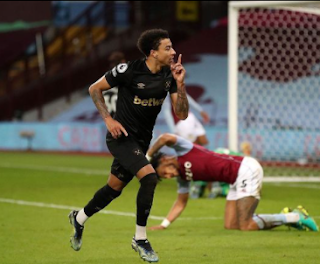 And the 28-year-old doubled his tally in the closing stages after Villa keeper Emiliano Martinez failed to hold on to his strike.

“It is great when you bring someone in and they do well,” West Ham boss Moyes told BBC Sport.

“If he keeps up the form he showed tonight, and he is not completely match fit, scoring the goals, he will not be far way from Gareth Southgate’s England squad in the summer.”

Midfielder Tomas Soucek had put the visitors in front at Villa Park, finishing off Said Benrahma’s pass in the 51st minute.

Ollie Watkins gave Villa a glimmer of hope, making it 2-1 with nine minutes remaining, before Lingard’s second wrapped up the points for the Hammers.