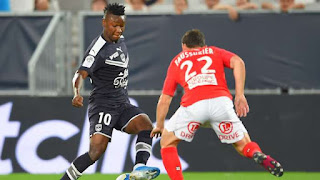 Nigeria’s Samuel Kalu was in action as Bordeaux were defeated 3-0 by Monaco in a Ligue 1 game at Louis Stadium on Sunday.

The Nigerian played until the 55th minute when he was withdrawn and Albert Elis was thrown into action when Monaco were already enjoying a 2-0 lead.

In the 64th minute, the home side won a penalty and Ben Yedder converted to give his side a 3-0 scoreline that they managed to hold onto and won the three points against Kalu’s team.

Senegal international Krepin Diatta was involved for Monaco as he came on in the 73rd minute for Gelson Martins. For Bordeaux, Gideon Mensah of Ghana was also involved when he replaced Ricardo Mangas in the 69th minute.

At Beaujoire Stadium, Moses Simon’s Nantes picked up a 2-0 win against Youssouf Kone’s Troyes. Andrei Girotto and Ludovic Blas – through a penalty – scored for Simon’s side in the 58th and 69th minutes, respectively.

Jean-Charles Castelletto of Cameroon and Pedro Chirivella, both of Nantes, were yellow-carded in the second minute of added time in the first half and in the 90th minute, respectively.

Gerson Rodrigues (66th) and Nasim Chadli (83rd) are Troyes’ players who were cautioned after the break.

Meanwhile, Mamadou Gueye provided an assist as his Metz side went down 3-2 to Angers at Raymond Kopa Stadium.

The Senegalese assisted Tunisian international Dylan Bronn to score the opener for Metz in the 10th minute before they conceded an equaliser in the 53rd minute when Mohamed Ali-Cho scored for Angers.

The visitors took the lead in the 58th minute through Algerian Farid Boulaya but in the 65th-minute things were level again when Thomas Mangani found the back of the net to make the score 2-2.