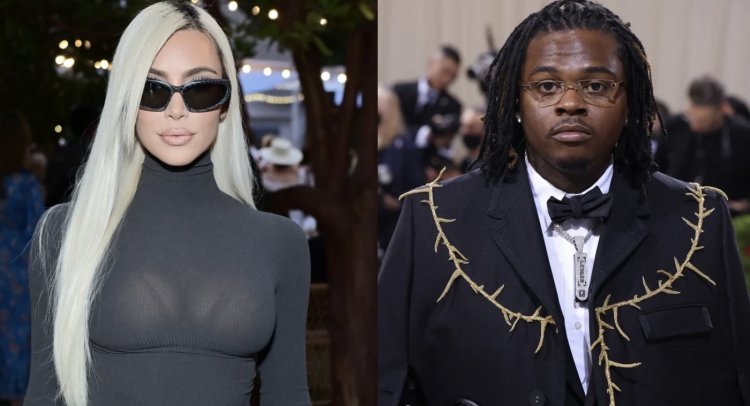 Kim Kardashian has spoken out in favor of jailed rapper, Gunna, following his bond denial after he was arrested on gang-related charges five months ago

According to the reality star and mother of four, the 29-year-old hitmaker was being held on 'no evidence' after he was charged in May with his regular collaborator Young Thug, 31, and 26 others on gang-related charges, including murder and armed robbery.

Kardashian, who has become an advocate for the wrongfully imprisoned in recent years, described what she considered to be a threadbare case against Gunna (real name: Sergio Kitchens).

'Imagine sitting in a jail cell for 155 days with no bond when the only evidence against you is a ticket for an unrelated window tint and someone saying you weren't in a gang,' Kim began her text post.

'That's where my friend Sergio finds himself today after having his bond denied for the third time despite there being zero evidence that he committed a crime.'

She described the 'pleasure' she had, meeting the rapper earlier this year. Though she didn't specify the circumstances, both attended the Met Gala in New York City on May 2 of this year, just days before Gunna's arrest.

'He appreciated my interest in criminal justice reform and asked me to take a look at his cousin's case,' she said, presumably referring to their first meeting.

Kim added that she had lately been working with the musicians legal team, adding that, 'the facts of his case are yet another example of why the "justice system" is anything but just.'

The ex-wife of Kanye West also expressed skepticism about prosecutors' claims that a nurse gave the rapper illegal drugs, as the 'nurse says this is untrue and there is zero evidence it happened.'

She suggested that prosecutors might even be misinterpreting a key piece of evidence.

'Prosecutors alleged he was in a gang based on a witness testimony but when you read that testimony it says specifically that he is not in a gang and the witness doesn't really know him and the interview is 3 years old.'

Despite prosecutors allegedly not having evidence linking Gunna to any crimes, or any information 'showing that he is a risk to the community,' she noted that 'Sergio had his bond denied once again today.'

Gunna and the rapper Young Thug were arrested around the same time.

Gunna is facing one count of conspiracy to violate (RICO), while Thug's charges are much more serious.

Back in May, the Grammy Award-winning rapper Young Thug was arrested and booked on gang-related charges into the Fulton County Jail in Atlanta. He was charged with one count of attempted murder and one count of participating in criminal street gang activity after authorities accused him of renting a car that was used to carry out a 2015 drive-by shooting that claimed the life of 26-year-old Donovan Thomas.

He was also charged with conspiracy to violate the Racketeer Influenced and Corrupt Organizations (RICO) Act.

Kim Kardashian claims rapper Gunna is being held in jail despite 'no evidence' following...

After seeing Kanye West and Kims drama, I am not publicizing...

Everytime I go out, I regret it â€“ BBNaija Angel