Kylie Jenner has broken her silence over the deaths and injuries associated with the Astroworld Festival, founded by her boyfriend, rapper Travis Scott.

The event left eight people dead and at least three concertgoers hosptialised over injuries they sustained at the festival in Houston, Texas on Friday.

Reality star  Kylie, 24,  has now sent her ‘deepest condolences’ to the families of the eight people who died during a stampede

Taking to Instagram, Kylie said in a statement: ‘Travis and I are broken and devastated. My thoughts and prayers are with all who lost their lives, were injured or affected in anyway by yesterday’s events.

‘I want to make it clear we weren’t aware of any fatalities until the news came out after the show and in no world would have continued filming or performing.

‘I am sending my deepest condolences to all the families during this difficult time and will be praying for the healing of everyone who has been impacted.’ 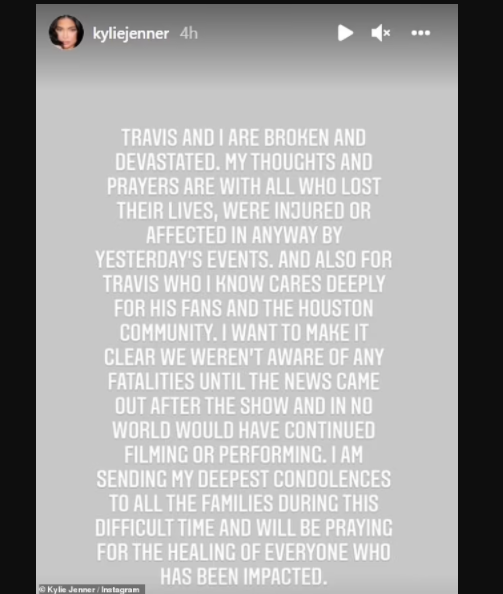 Jenner, who is expecting her second child by Scott, also attended the concert at the  Astroworld festival in Houston with her sister Kendall who was also said to be unhurt.