The Kaduna Zonal Office of EFCC on Thursday March 21, 2019 arraigned one Nurudeen Musa Abdullahi before Justice P. Mallong of the Federal High Court, sitting in Kaduna on a two-count charge bordering on conspiracy and obtaining money by false pretence to the tune of N113,490,000 (One Hundred and Thirteen Million Four Hundred and Ninety Thousand Naira).

Nurudeen was a consultant/software developer with Sofftech Computer Ltd, a company engaged by the Nigeria National Petroleum Company, NNPC, to develop and manage its billing software, used in the lifting of petroleum products in PPMC/ NNPC Depot, Kaduna.
The defendant was responsible for overseeing the running of the billing software, taking care of any new report, training of NNPC staff and any update that may be needed on price changes or depot operational changes on behalf of the company. 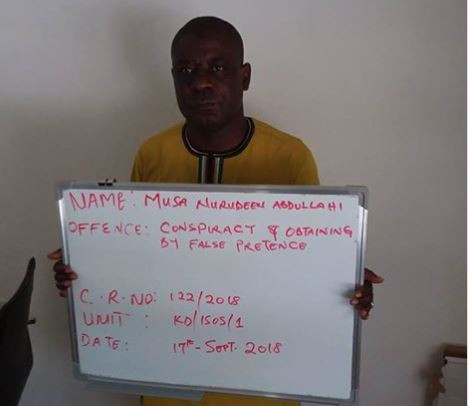 Nurudeen was arrested by the EFCC, following a complaint made by Bi-crude Products Limited, AL-Amin Emporium Limited, Alh Sa’adu Tsanyawa Nigeria Limited, Sabag Oil and Gas Nigeria Limited and Dan Abdulkadir Global Resources Limited, in which they alleged that they received demand letters from the Nigeria National Petroleum Corporation, NNPC sometime in 2018, requesting for the settlement of outstanding balance of various sums being money for products their companies lifted from the Kaduna Depot between 2008 and 2018 without payment.

They further alleged that the defendant conspired with others, now at large and used their companies’ names to defraud the NNPC.

One of the count charge reads: “that you Nurudeen Musa Abdullahi sometime between 2011 and 2014 in Kaduna within the Kaduna Judicial Division of the Federal High Court, did retain a total sum of N113,490,000 (One Hundred and Thirteen Million Four Hundred and Ninety Thousand Naira) in your account No. 2002932756, domiciled in First Bank Plc, a sum which you knew or suspected to be proceeds of crime or illegal activity to wit: criminal breach of trust and you thereby committed an offence contrary to and punishable under Section 17(a) and (b) of the Money Laundering Prohibition Act 2011 ( as amended in 2012).”