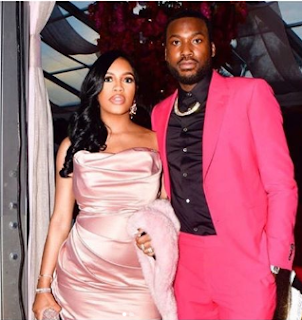 Meek Mill announced that his girlfriend Milan Harris is pregnant on Wednesday night in a now-deleted tweet during a Twitter war with his ex Nicki Minaj.

The rapper, 32, found himself caught in a vicious and deeply personal exchange with the Anaconda hitmaker, 37, after he liked a photo that made reference to her new husband Kenneth Petty.

And in one of his final tweets, Meek announced: ‘My girl is with me pregnant watching me tweet about my ex is very clownish… Ima exit,’ yet the artist quickly deleted the post.

Milan revealed she was pregnant in December but made no mention of Meek, she showed off her growing baby bump in an Instagram clip and has continued to update fans with her journey since.

The fashion designer had kept her pregnancy secret up until then and explained it was due to being ‘super sick’, she said in a post: ‘For the first 3.5 months I’ve been super sick and unable to work and move like I use to do.’

This will be the rapper’s third child as he already has two sons – Rihmeek and Murad Williams from former relationships.

Since Meek’s Twitter war with Nicki, Milan shared a cryptic Instagram snap, she penned: ‘These days all I can think about is my sweet baby.

‘Lately I’ve mastered the art of remaining calm in lots of situations because I only want positive energy transferred to my little blessing❤️.’

It comes after Meek got caught in a vicious and deeply personal exchange with Nicki on Wednesday night after he liked a photo that made reference to her husband Kenneth.

The Grammy-nominated songstress, 37, posted a shot of the rapper staring at a cellphone, writing, ‘Trigger fingers turn to #TwitterFingers bad built face a** obsessed with the Queen.’

The Queens, New York native then said that Meek was preoccupied with her life, and that his actions were humiliating his girlfriend, fashion designer Milan.

Things only escalated from there, as Meek referred to Minaj’s brother Jelani Maraj, who last month was sentenced to 25 years to life in prison a New York prison after he repeatedly raped an 11-year-old child while her mother was at work.

The 41-year-old was found guilty of ‘predatory sexual assault against a child and endangering the welfare of a child’ in 2017 and Nassau County Supreme Court Judge, Robert McDonald, refused to give him a soft sentence.

‘You sad you willing to crash your man because you losing now and everybody in the industry know you a bad person!’ Meek said. ‘You been knew your brother was raping that little girl that’s why I got away from you!’

Minaj launched her own salvo back at Meek, boldly claiming he was physically abusive with her and other women in the past: ‘You beat your own sister and taped it. Spit on her & taped it. Kicked me in front your mother and sent her to the hospital.’

She implied that Meek was feeling bold amid his friendship with Drake, adding, ‘S***ing drake d**k made u feel tough again. Move on.’

Minaj then criticised Meek for mentioning the issue involving her brother, saying, ‘Imagine talking about an alleged rape of a child to hurt someone who wasn’t involved just so ppl can dislike me.’

She continued: ‘You can never stand on your own. You won’t tell ppl the mother is on tape asking me for $20 million to make the charge go away tho. U was around. U know. See u soon.’

Meek denied Minaj’s claims of physical abuse, telling his 9.1 million followers that he’s looking to avoid talking about Minaj in the near future.

‘For clarification I don’t hit women and I won’t let my interviews be filled with question about her or any situation to do with her when I come out to do press for my new album!’ he wrote, adding ‘No devils tricks.’

Nicki and Meek had been friends for years, they started officially dating in 2015 and split two years later in 2017. 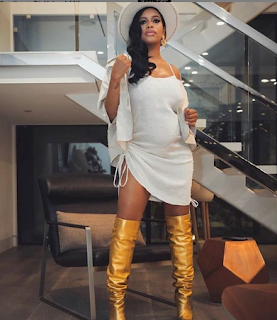 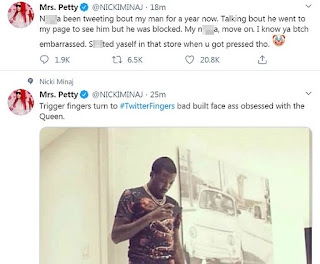 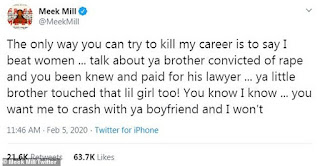