Children are now taking up arms to fight drug gangs in the violence-plagued Mexican state of Guerrero.

AFP reported that Mexican children who are between the ages of 5 and 15, practice with rifles and handguns or makeshift weapons in various drill positions for a few hours every week at the foot of a wooded hill in the village of Ayahualtempa.

The kids’ instructor is said to be Bernardino Sanchez, a member of the militia ‘Regional Coordinator of Community Authorities (CRAC-PF)’ which secures 16 villages in Guerrero area. 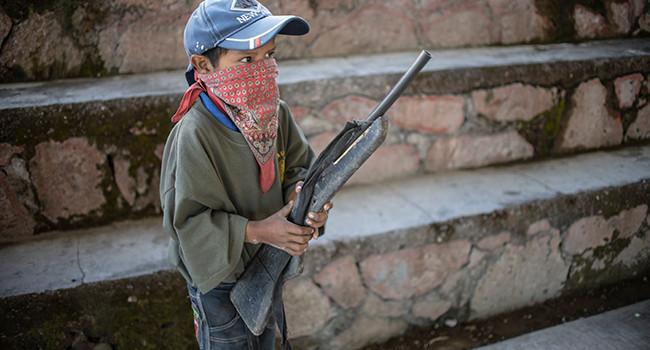 Over 600 people including children have voluntarily joined the militia force to fight organized crime. Thirty children are said to be in training.

The report came barely a week after Mexican authorities were accused of doing nothing after the charred bodies of nine men and a child (musicians and their assistants) who were kidnapped and tortured were found inside their two vans at the bottom of a ravine.

Though Los Ardillos cartel was identified to be the gang behind the murder, no action was reportedly taken. 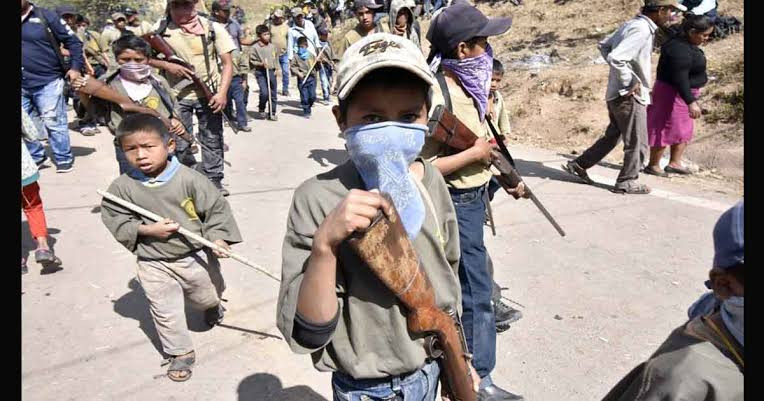 Recounting his ordeal before joining the training, 13-year-old Gustavo said;

“I  wanted to study, but since the school is close to the area where Los Ardillos operates, I preferred the community police … They were about to capture me.”

Gustavo also revealed that he already knows how to use and clean a .22 caliber shotgun which he said feels good holding on to.

Guerrero Governor, Hector Astudillo criticized the training on Friday January 24 as he negotiated with the militia over lifting roadblocks.. The training instructor, Bernardino however fired back at him stating that many children have lost their parents and he does not want to see another child traumatized by the murder of their loved ones.