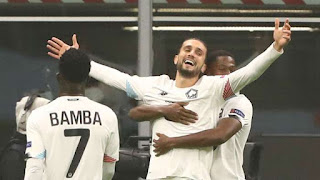 Zlatan Ibrahimoavic was taken off after an hour as Milan slumped to their first defeat of the season, with Yusuf Yazici starring at San Siro.

Milan’s unbeaten run came to a shuddering halt after 11 games as Yusuf Yazici’s hat-trick secured an emphatic 3-0 victory for Lille in the Europa League.

Inspired by the form of Zlatan Ibrahimovic – who already has eight goals to his name – Stefano Pioli’s side have made a wonderful start to 2020-21.

But Ibrahimovic, who was subbed off in the 62nd minute, failed to lift the Rossoneri in a dismal showing at San Siro, with Yazici running the show.