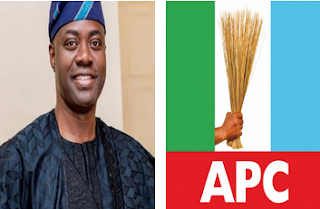 Lagos State chapter of the All Progressives Congress (APC) on Thursday advised Oyo State Governor Seyi Makinde to focus on the challenge of governing his state, instead of day-dreaming about how the People’s Democratic Party (PDP) can win elections in Lagos in 2023.

The party said, in a statement by its Publicity Secretary, Seye Oladejo, that the Oyo State governor did not speak on his future permutation for Lagos PDP from a vantage point of experience.

The statement reads: “My candid advice to Governor Makinde is this Igbo proverb that ‘those whose palm kernels were broken for them by some benevolent spirit should learn to be humble’.

“His Excellency is apparently still excited that he managed to attain his dream office after series of electoral defeats. He needs not forget that he leveraged on the storm in the Oyo State APC family.

“However, his lack of experience in governance at any level has become apparent with nine months of false starts and lack of developmental ideas. It will take more than the still-born unity amongst gangsters to take Lagos State from the path of progressive governance.

“It appears His Excellency Makinde has the spirit of clairvoyance through which he’s able to predict his political future of imminent defeat in future elections. He could boost his democratic credentials by obeying court orders as regards the issue of local government chairmen. Those he disappointed in their ill-conceived desperate power-sharing formula are still waiting to take their pound of flesh.

“The good and politically sophisticated people of Oyo State know better than to allow unfocused experimentation in governance to continue.”