Some Nigerians have expressed mixed reactions over the arrest of a man who allegedly stole two cartons of fruit juice and milk drink in Bayelsa.

According to a media aide to Bayelsa Governor, the suspect was caught around Osiri road in Yenagoa, the state capital on Thursday, July 1.

“He was reportedly caught at osiri road for stealing caprisone and nutri milk. I advocate for his immediate release, probably he was sourcing to feed his kids. This is a tough time for everyone, inflation on the rise, #10,000 is almost worthless, we pray for the best. This man should be set free.” he wrote. 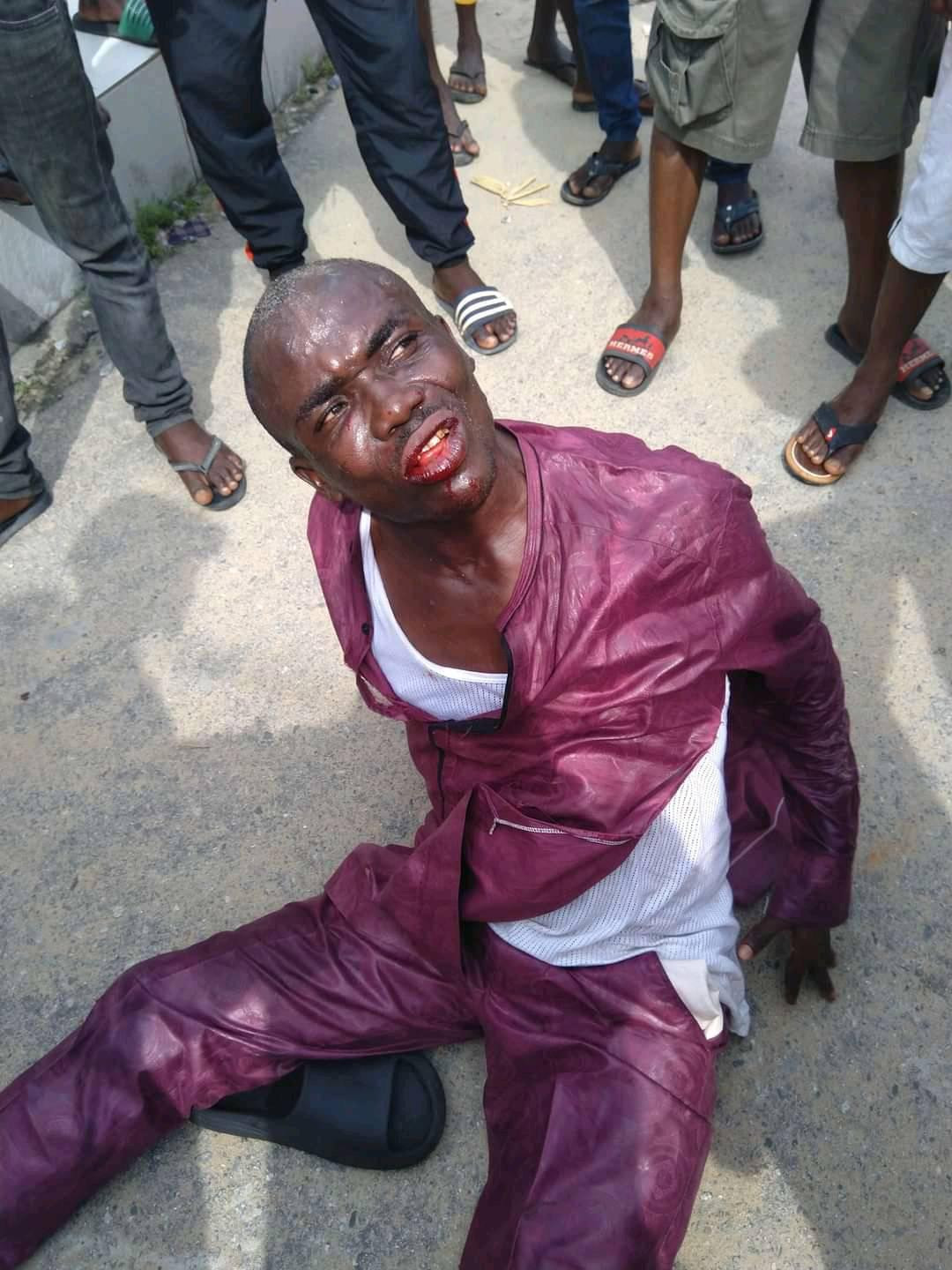 One Miebi Albert, who claimed to know the man said that he is mentally challenged while another person, Alfred Ngonabo revealed that the suspect is a staff of Environmental Sanitation Department and a notorious thief.

“This criminal is not hungry, I was told he is a staff of Environmental Sanitation, this dude does STEALING for fun, STEALING is his hobby, every one around him is tired and sometimes he steals like 2-4 per day. I believed he is cursed. Even his fellow criminals are not happy with him because he doesn’t take a break. This guy is cursed, his days are numbered, his last days are here. He robbed me of my phone on the 13th of February and sold my phone to an aboki for just 10k. All police stations in yenagoa metropolis know  his antecedent.” Ngonabo wrote. 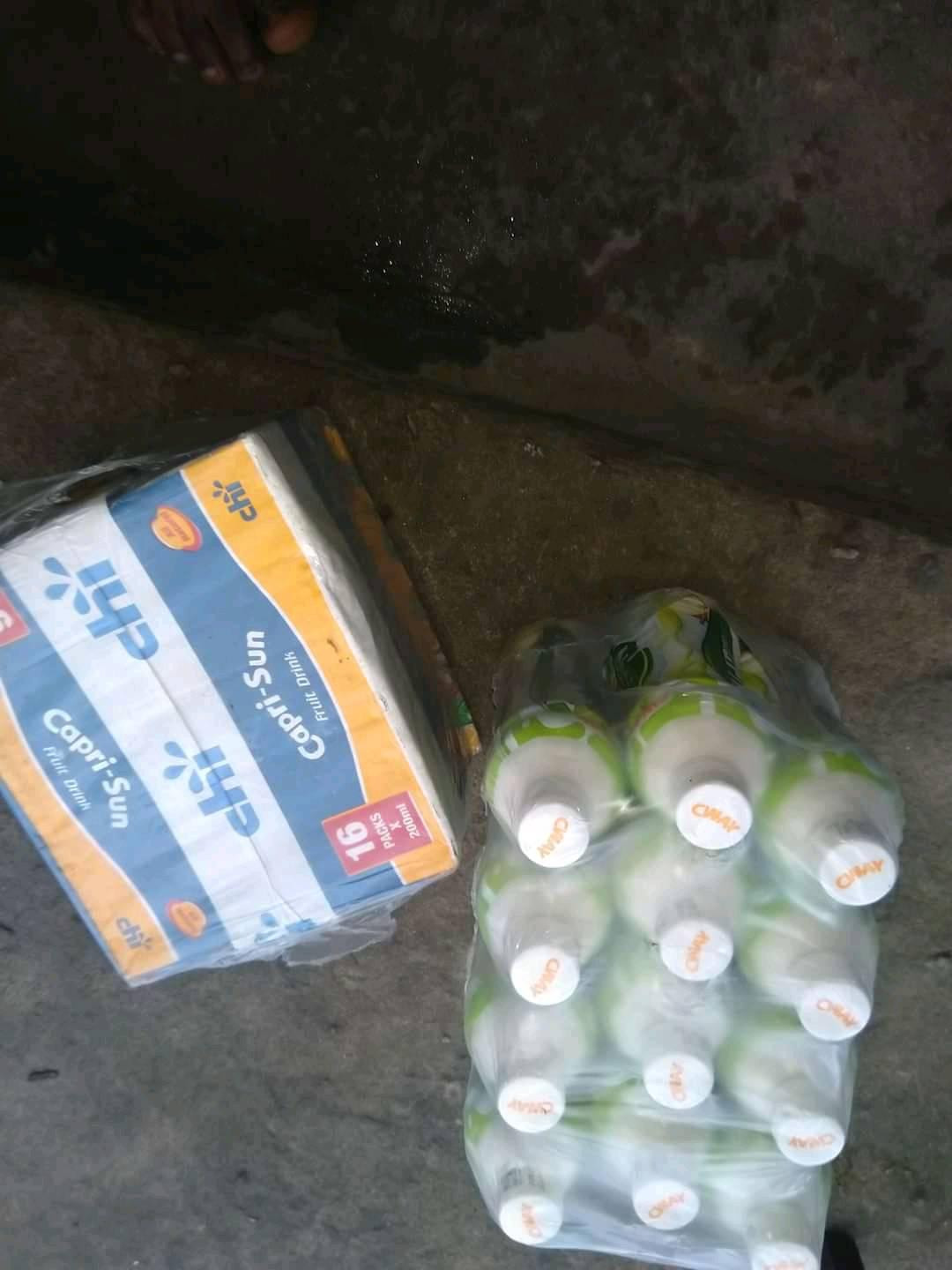 Reacting to the incident, some people said the man should be set pardoned while others opined that theft is a crime and should not be condoned no matter the gravity.

Meshak Sintei: “Though his act (Stealing) is a crime punishable under our extant laws. However, a careful examination into the items he allegedly stole indicates that they are Necessaries for Children. The man should be pardoned with an undertaking that he’ll never steal again”

Tarila Williams: U didn’t think of the effect of what he stole will have on the person’s business? Or u think the person doesn’t have children or family to cater for too? Provisions stores hardly see gain plus rent and other bills they will have to pay and someone is coming to scatter the little effort. It is hard for everyone please, and not a justification for ill acts. I do not support advocating for things like this. He should go find something to do. I don’t think I can over say this.. “dear people of God, don’t have children if you know you don’t have a means to cater for them ” abeg”

Isaiah Opuoyibo: “Jungle Justice is never an option… Official criminals are out there and we even celebrate them when they present themselves. While I don’t support the act, such action shouldn’t be an option for the populace.”

Karibo: “Don’t justify what is bad. Tough time is not a/n reason/excuse to indulge in act that is against humanity. Stealing is stealing irrespective of any condition, he should face what penalty that suits his action”

Douye: Times are hard for everyone,does not mean he should go and steal juice. If his kids wants to drink juice,he should have explained to them for now Dad can’t provide. Parents should let their children understand times and seasons. That is another man’s sweat”

Duoba: “Bro if we continue to encourage thief’s like the way you are doing now I don’t think you are preaching good message to the world I was in the shop this morning along old CBN road osiri, before I left to get something around this very man work inside the shop and steal this items please let’s not encourage bad thing even do there’s hunger virus everywhere”

Victoria Orji: So now it all boils down to d fact dat he wants to feed kids, so why didn’t he look for menial jobs instead to steal …if only people will learn not to have kids if u don’t have any means to feed dem, or have only one or two kids u can cater for…not everyone must have kids, having kids won’t make u go to heaven,,if only people will listen ,it will prevent all this stealing. U will see people encouraging even a jobless and insane person to have one child at least bcus dey feel no one should stay without a child, oya how will dis jobless man feed his kids? Dey will now say…na God dey look pikin…. mtchewwww Mixed reactions as man is nabbed for allegedly stealing fruit juice and milk drink in Bayelsa.

child at least bcus dey feel no one should stay without a child, oya how will dis jobless man feed his kids? Dey will now say…na God dey look pikin…. mtchewwww

so annoying ehn, they don’t know dat it’s not compulsory to have kids if u don’t have d means to feed dem. Don’t bring kids to dis world to suffer, now dat he is arrested ,who will feed d kids? He didn’t even still rice or garri, he still went and stole rich man children drink. thief with a choice. Me sef never see Nutrimilk drink for 10yrs now” 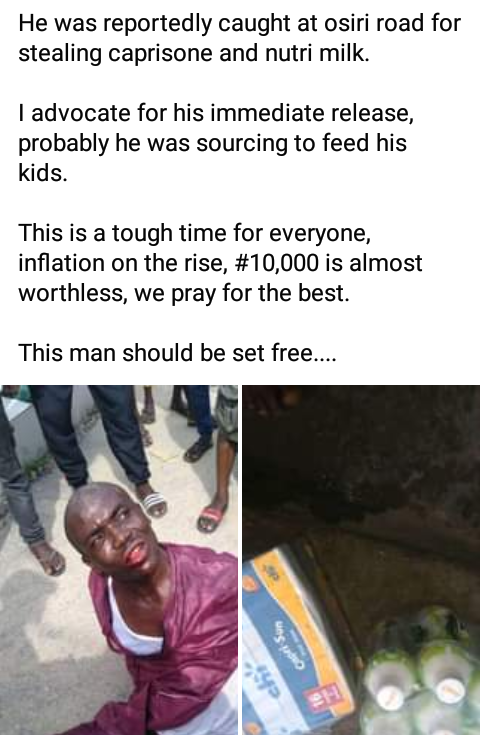 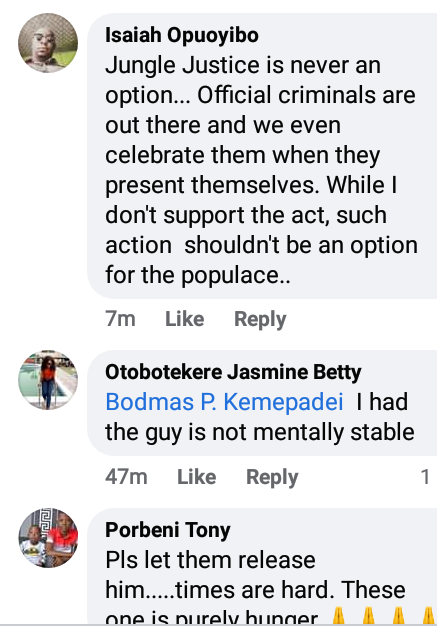 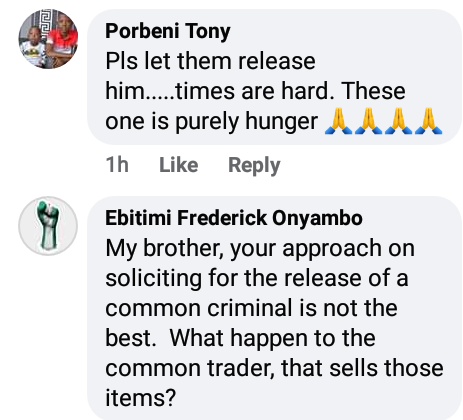 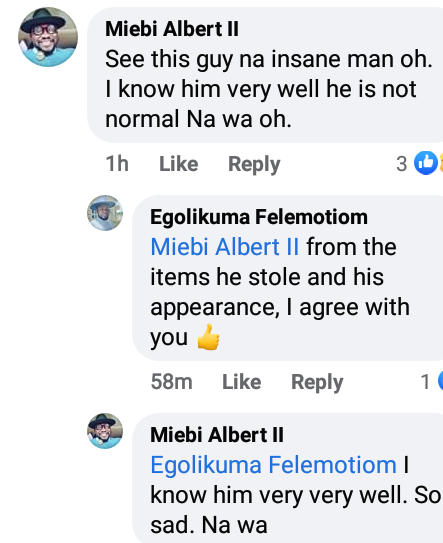 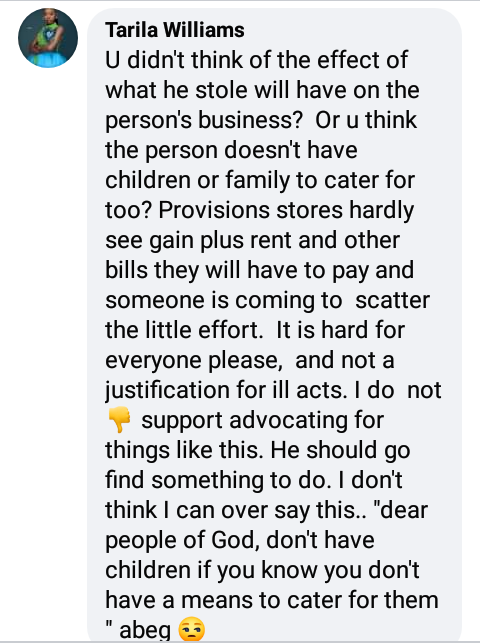 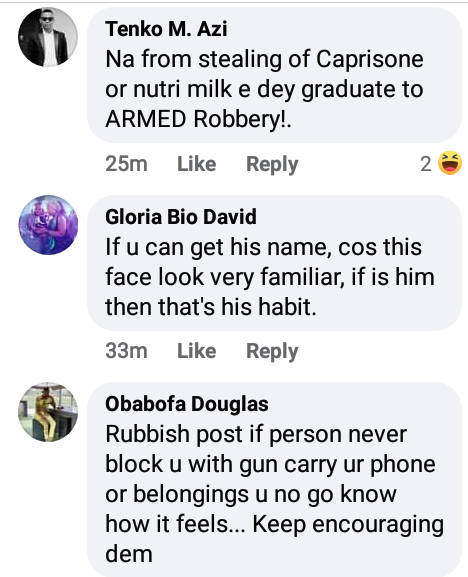 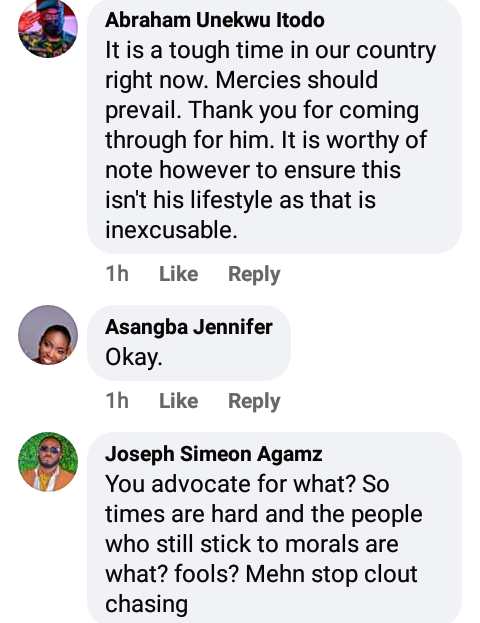 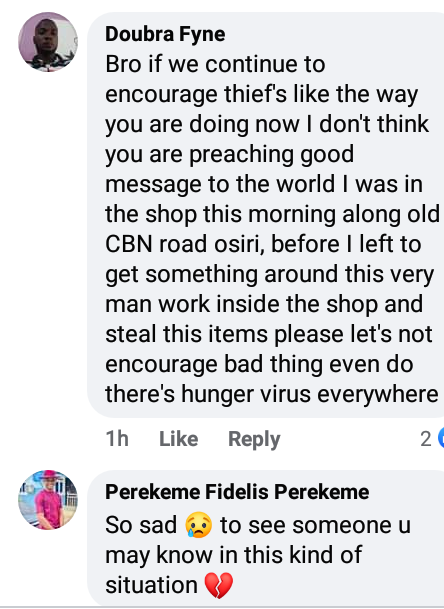 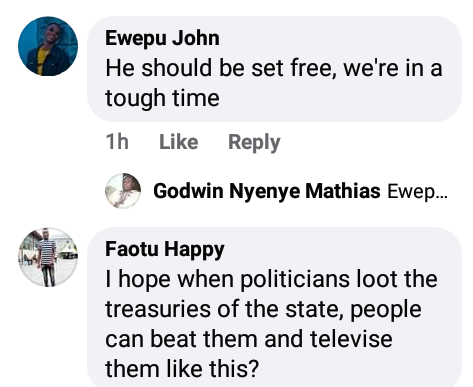 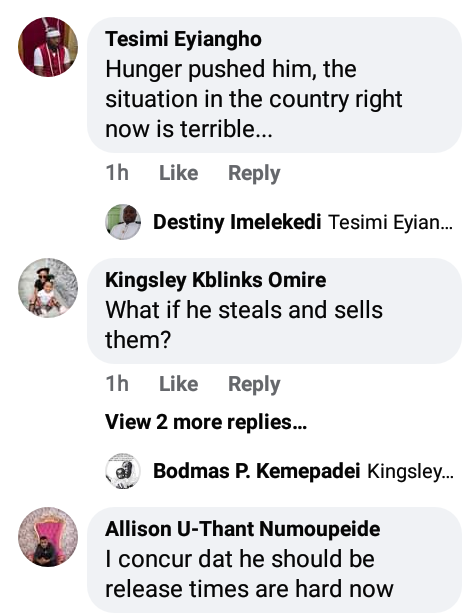 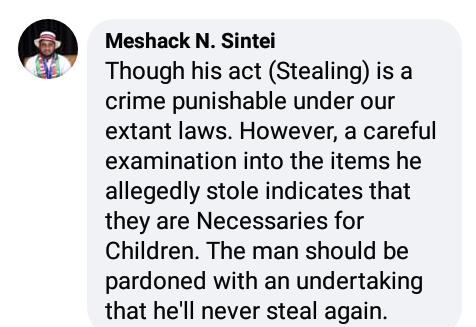