Netflix has suspended a trans employee who criticized Dave Chappelle’s comedy special The Closer. In the stand-up set, which was released on October 5th, Chappelle doubles down on his jokes about LGBTQ groups.

After the special was released, Netflix software engineer Terra Field who identifies as queer and trans wrote that Chapelle “attacks the trans community, and the very validity of transness”. 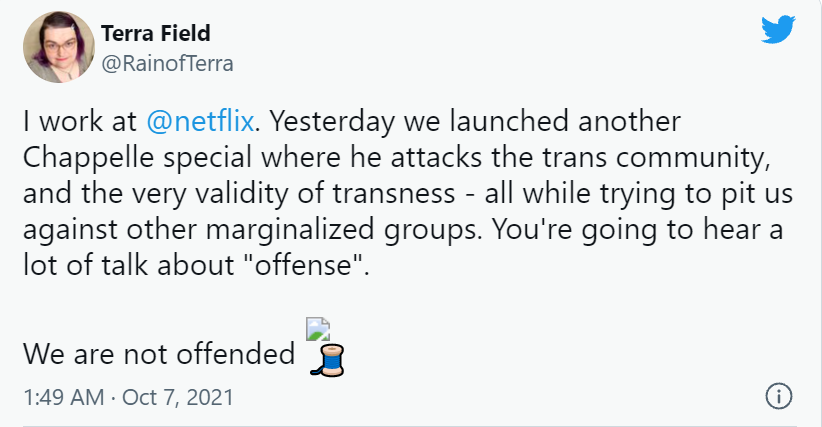 After the tweet went viral, Field and two other employees were suspended for attending the “QBR”, Netflix’s quarterly business review, a two-day affair that convenes the top 500 employees at the company.

Netflix did not suspend Field over recent tweets decrying what she called anti-trans jokes in the Chappelle special, individuals familiar with Netflix said, but for attending uninvited. An investigation has been launched into the three employees.

Chappelle’s special has sparked significant controversy inside Netflix. Shortly after it came out, employees started asking pointed questions about whether or not trans people were included in the decision to air the special and where the company draws a line between commentary and transphobia.

On October 8th, Netflix co-CEO Ted Sarandos sent out an internal memo defending the special and its right to exist on their platform. He stated that he doesn’t think ‘Closer’ crossed the line into inciting violence against the trans/LGBTQ community and that stand-up gets a longer leash by default in that regard.

“It never feels good when people are hurting, especially our colleagues.

“You should also be aware that some talent may join third parties in asking us to remove the show in the coming days, which we are not going to do.”

“Several of you have also asked where we draw the line on hate. We don’t allow titles on Netflix that are designed to incite hate or violence, and we don’t believe The Closer crosses that line. I recognize, however, that distinguishing between commentary and harm is hard, especially with stand-up comedy which exists to push boundaries. Some people find the art of stand-up to be mean spirited but our members enjoy it, and it’s an important part of our content offering.”

Netflix has a long history with Dave Chappelle. In 2016, the comedian signed a deal to create three specials for the platform. Four years later, Netflix pulled Chappelle’s Show from the streaming service at the comedian’s request. (It then reinstated it in 2021 after Chappelle’s beef with Comedy Central died down.)