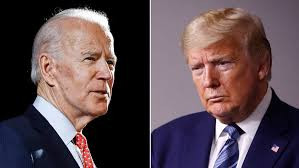 The polls conducted by CBS/YouGov, shows Biden leading Trump 46 to 41 in Texas, with 14 per cent undecided. The two men were tied at 43-43 in the same poll in April.

The same poll has Biden also leading 46 to 42  in Florida, a critical battleground state.
In Arizona, they are tied at 46 per cent. Trump won Arizona by less than 2 percentage points in 2016.

Surprisingly, all three states are getting increased rates of coronavirus, infections, with Florida reporting a stunning 15,000 infections in a single day Sunday, and the state’s 270,000 now rank higher than Spain or France.

There is the exception of  Georgia, where Trump leads Biden 48 to 45. Georgia is a strong Republican state.

Arizona, where Trump held a campaign event in a megachurch last month, is experiencing its own spike, in a state where immigration remains a driving issue.

Biden and Trump are set to battle for the US presidency in November 2020.