The drop was compounded by the reduction in subscriptions caused by the Nigerian Communications Commission’s (NCC) temporary embargo on registration and activation of new Subscribers Identification Module (SIM) cards in the country.

This followed the initial directive that all operators should integrate NIN to all SIMs currently in use. 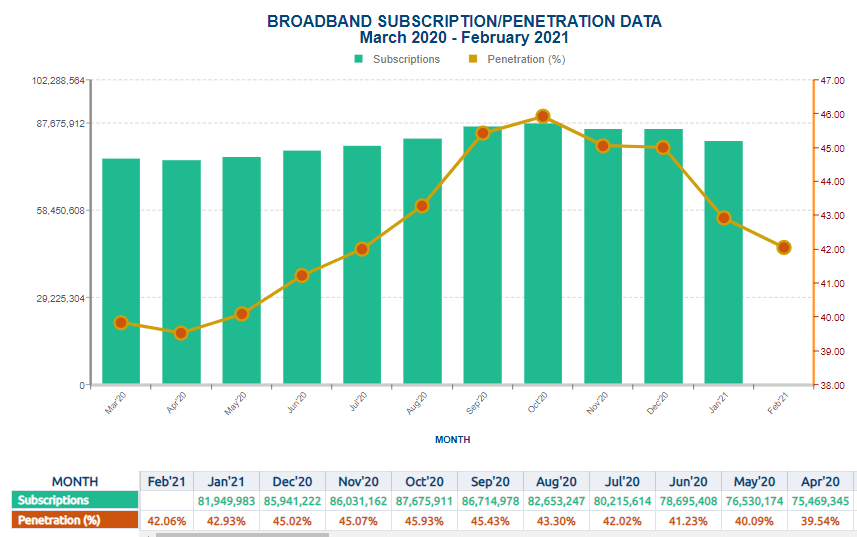 This means that a total of about 11.63 million subscribers has been lost by Telcos since the sim registration embargo started.

A breakdown shows that MTN remains the market leader but all telcos recorded losses for the third consecutive month.

Of all the telcos, Airtel lost the largest amount of subscribers. The company lost over 1.99 million subscribers to fall further below Globacom on the Telco market. Airtel subscriber now stands at 5.14 million. 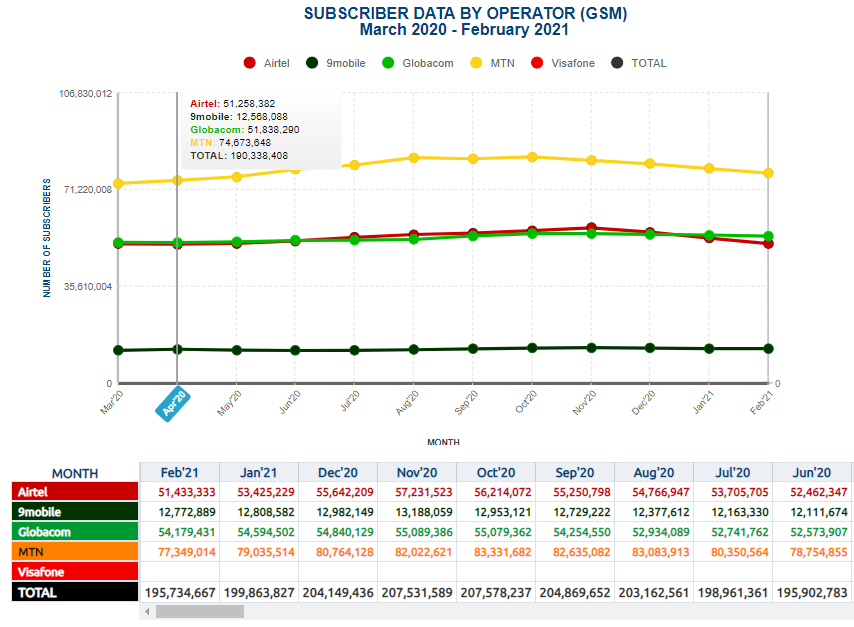 9mobile lost the least amount of subscribers, its numbers dropping just 35,693 to 12.77 million subscribers in February.

MTN was the biggest internet loser for the second consecutive month. The telco lost 1.14 million internet subscribers to bring its total down to 62.84 million.

Airtel followed closely, losing 1.07 million subscribers to record a total of 38.95 million during the month. This is the first time its subscribers dropped below 40 million in the last 6 months.

Globacom and 9mobile suffered the least amount of internet subscriber losses. Both operators lost below 300,000 subscribers.

Revenue losses exceed N15 billion
In general, the ban has cost Telcos in the industry about N16.15 billion in 3 months, going by the industry Average Revenue Per User (ARPU) of ₦1,420 and the 11.63 million subscribers drop reported by NCC.

ARPU obtained from the Association of Telecommunications Companies of Nigeria (ATCON) is defined as the total revenue divided by the number of subscribers. It is a measure used primarily by consumer communications, digital media, and networking companies.

If the recent court order demanding an extension of NIN-SIM registration by two months is effected, telco losses may continue to mount.

However, Chief Deolu Ogunbanjo, the President of the National Association of Telecoms Subscribers of Nigeria (NATCOMS) told Guardian that the losses recorded by telcos aren’t too much for security.

According to him, it won’t take long for operators to recoup their losses.

Summary
Losses caused by the embargo on registration and activation of new SIM cards have continued to mount. Telcos and subscribers are feeling its full effect and broadband penetration is greatly limited.

While the suspension of registration is understandable, a prolonged embargo could have a drastic effect on the government’s plan to drive broadband penetration to 70% by 2025.

As was suggested in our last review, the best bet as things stand is to open up sim registrations at a controlled pace and maybe with new regulations like NIN.

Because waiting for the whole process to be completed with the continuous extension of deadlines will mean the embargo will last for months and the damages could be more severe.