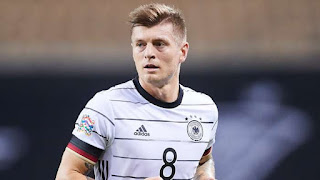 Toni Kroos has called for Germany to improve tactically ahead of their European Championships showdown with France.

Germany will open their Euro 2020 campaign with a Group F clash against France, who reached the final of the tournament in 2016 before winning the World Cup two years later.

Les Bleus are being billed as favourites to win the continental trophy, and Kroos has warned his Die Mannschaft team-mates that they will have to execute the perfect game plan in order to pick up a positive result on Tuesday night.