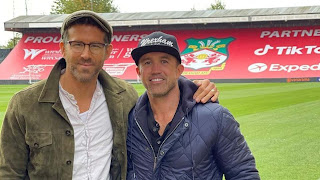 Wrexham’s Hollywood owners Ryan Reynolds and Rob McElhenney affirmed that they have big ambitions for the National League club – even if any oil money they might possess is of in edible rather than fuel form.

The pair took over at the Racecourse Ground in a deal that was completed at the start of 2021.

And their first press conference in charge caused quite a stir on Thursday as they continued a visit which has captured the attention of fans of the Welsh side.