The promising shot-stopper, who had been taking in a loan spell at Livingston this season, is set to spend time away from the game

Norwich City have announced that the club’s 20-year-old goalkeeper, Dan Barden, has been diagnosed with testicular cancer.

The youngster has undergone a number of follow-up tests following his initial diagnosis and will now begin a treatment programme.

He will be taking time away from the game during that process, with a loan spell at Scottish Premiership side Livingston being put on hold. 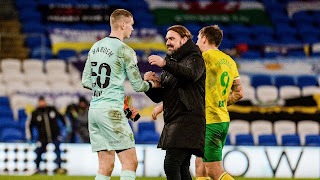