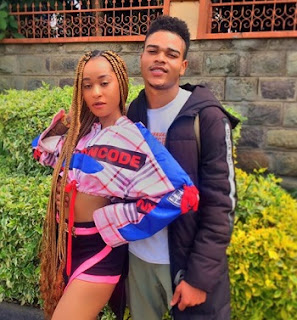 Noti Flow has officially parted ways with her months-old boyfriend after his multiple love affairs behind her back leaked.

The petite female rapper dumped her long-time boyfriend Colonel Mustafa in a messy scandal in November 2019, both exposing their dirty linen in public for all to see.

Months later, June 2020, she walks into another relationship, this time, with a Caucasian cool kid identified as Jay Jay who was sure a heartthrob for the single ladies.

A beautifully coated love affair that was almost convincing enough that for richer, for poorer, in sickness and in health, nothing would tear them apart…

“You are nothing short of my everything🥺💘,” he would adore her.

With the lass responding;

That was just 3-6 days ago as the couple sweetly serenaded each other with romance, but today their book of love lives to tell another story.

This is after Noti came out to declare in a cryptic message;

Before throwing shade that infidelity is just not her cup of tea. 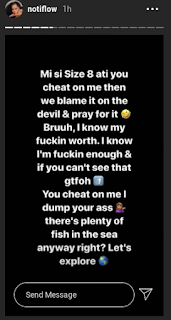 Disclosing that she had let another cheating scandal slip but not this time round.

On the first occasion, after she got wind from a lass named Nicole, she confronted him and they both alleged nothing was going on and so she let it go.

But this time, lovey dovey messages between her man and a chick named Florence, have completely broken the remaining bit of trust she had in him.

A quick glance at his end, a regretful Jay Jay puts up a cryptic post; 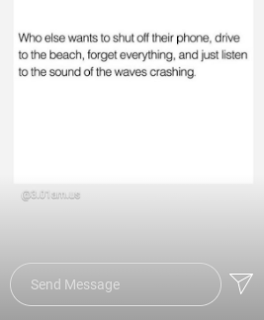 Noti Flow has since deleted any memories she had made with the Caucasian kid from her timeline but a dear Jay Jay is still holding on, maybe hopeful things will eventually work out.