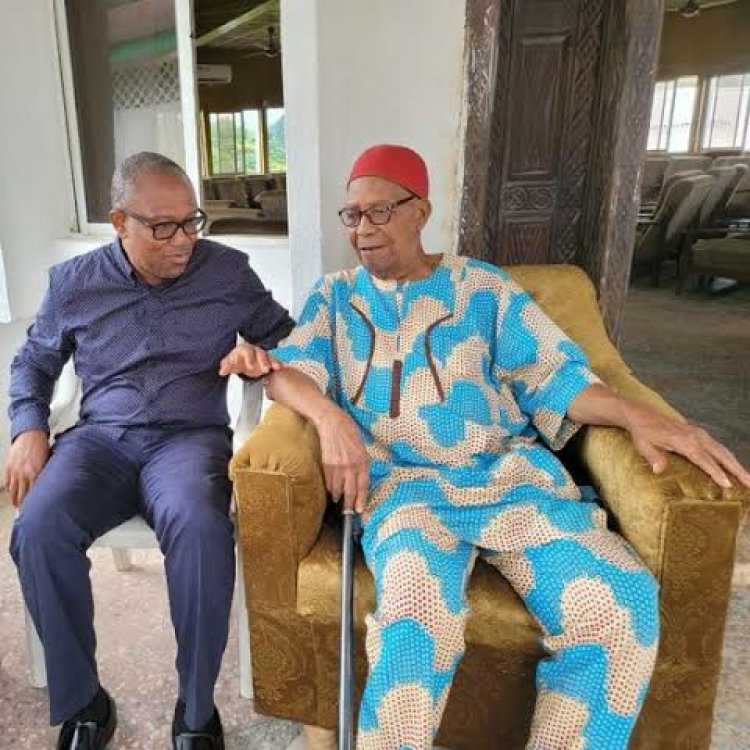 The presidential candidate of the Labour Party, Peter Obi, has expressed sadness over the death of elder statesman and Nigeria’s First Republic Aviation Minister, Chief Mbazulike Amechi, who died at 93.

In a series of tweets, Obi shared a picture of himself with the deceased, hailing the statesman for his fairness and patriotism.

The tweet partly read, “I received the sad news of the transition to glory of Late Chief Mbazulike Amechi (The Boy is Good), this morning. He was an elder statesman whose love for peaceful coexistence, desire for fairness, equity and justice, and fire of patriotism remained alight until his death.”

In the same vein, the governor of Anambra State, Chukwuma Soludo, also mourned the deceased.

Soludo, in a statement by his Press Secretary, Christian Aburime, described the late Amaechi as an outstanding patriot and nationalist who served the nation diligently.

According to the governor, the late elder statesman lived an impactful and exemplary life worthy of commendation.

He further stated that the death of Amechi was not just a loss to his community, Ukpor, in Nnewi South Local Government Area and to Anambra State, but also a monumental loss to Ndigbo and the Nigeria in general.

He, therefore, on behalf of the government and people of Anambra State commiserated with the Amechi family over the irreparable loss

He said, “He was a renowned nationalist, an active and staunch voice in the Zikist movement as well as an accomplished elder statesman.”

The All Progressives Grand Alliance described Amechi’s death as a great loss to Nigeria.

According to a press statement in Abuja on Tuesday signed by the National Publicity Secretary of the party, Barrister Tex Okechukwu, APGA felt deeply touched by the death of the last of the “Titans that laboured tirelessly for the independence of our fatherland”.

In the statement made available to The PUNCH, the party thanked God for the fulfilled life led by the deceased and urged his children to follow his footsteps and ensure that the legacies for which he lived and died were not abandoned.

The party prayed God to grant his soul eternal repose in heaven, and the family the fortitude to bear the seemingly irreplaceable loss.

President Biden Closes US airspace to Russian flights as...