The All Progressives Congress, APC, Monday commended former President Goodluck Jonathan for his disposition on the outcome of the November 16 governorship elections in Bayelsa State, saying that the former President was delighted with it.

The APC Governorship candidate in the election, David Lyon was declared winner by the Independent National Electoral Commission, INEC as he defeated the candidate of the Peoples Democratic Party, PDP, Senator Diri Douye. 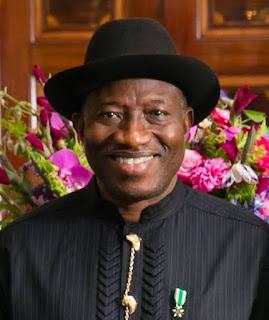 Former President Jonathan is a member of the PDP which has been in power in the state until the November 16 polls that has witnessed the defeat of the ruling party in the state.

Speaking to State House correspondents after the presentation of the Governor-Elect, David Lyon to President Muhammadu Buhari at the Presidential Villa, Abuja, Chairman of the APC Governors Forum and Governor of Kebbi State, Atiku Bagudu said that former President Jonathan was happy with the outcome of the election.

He said, “We were in Bayelsa for over 72 hours, we didn’t see a tire burning, we didn’t see people running, we didn’t hear any gunshot and everyone was celebrating in all the areas we passed since yesterday (Sunday) which shows acceptance of the candidate of our party of the process itself.

“It is equally noteworthy that Bayelsa is a state which is home to a former President of Nigeria and this election won by a party different from which he belongs to has been accepted by all including people around him. So far, from what we hear and what we see, he is also happy with the outcome irrespective of the difference in the party which is an indication of the transparency of the process. “

Governor Bagudu said that they were at the State House to present President Buhari the governor-elect, David Lyon.

He said,” Many people worked hard in making this happen, most importantly, Mr. President, who has always shown the party that win or lose we should aim for free, transparent and fair elections because, that is what will guarantee peace, confer legitimacy and support for elected persons to proudly execute the mandate that they are given. And in Bayelsa, we have seen a demonstration of that. Everyone is talking about how free, transparent and fair the elections were.

“This is a victory for Nigeria because it shows that parts of the country that has been under another political party, can in a free, fair election make their democratic choice and vote for another party with the right candidate.”

According to him,” As the President and our father, he has a brand new baby boy who will be sworn- in on Valentine Day February 14, 2020, as governor of Bayelsa State. We thanked the President for his fatherly role and he insisted that we must ensure that while we are determined to win the election that we must play by the rule and ensure that the process is transparent.

“And above all the President has always been concerned about peaceful election and we were proud to inform him that besides very isolated cases of ballot box snatching, the election in Bayelsa can be described as the most peaceful.

” I believe since 1999, you will agree that this is the only time we can say the election is truly transparent and peaceful. Again, our candidate attract supports across the political divide. When you see territories and communities where his victory was being celebrated you will agree that not only did he have the support oof the APC family, he had support beyond the APC family.

“And of course, the President was very happy that we had a peaceful election in Bayelsa state. But of course, we also know that there was an election in Kogi but that is a matter for another day when we present the governor are-elected.

“But we do realize that all the 16 senators who decamped along with Senator Bukola Saraki from APC to PDP, hard as they have tried to come back, the Nigerian people in their respective constituencies, have insisted on punishing them for being disloyal and transferring it monetizing their mandates.

“I think the only one that is still struggling now is Dino Melaye but as you can see from the result so far, Senator Smart Adeyemi is leading by over 20,000 votes even though INEC insists we must have a re-run for the remaining areas we are confident that there is no way he can make up for 20,000 vote deficit.

“I think the lesson for us to be learnt as a party is rather clear that when politicians go to the polls to collect mandate on a particular political platform and then they dump the party for another party, the electorate will always be waiting for them. Over time we are likely to see people out of fear for the electorate, not monetizing their mandate after they are elected.

“But overall, we are grateful to Almighty God for making this election successful, we appreciate the people of Bayelsa State who have reposed confidence in our party and on our candidate. We also want to appreciate the very warm reception that the former President accorded our candidate who in line with his character of humane, simplicity and commitment, in company of our chairman of APC governorship campaign for Bayelsa state, Jigawa state governor Abubakar Baduru and governor Bagudu who is the Chairman of APC governors forum and co-chair of the Bayelsa election.

“We are also very appreciative of the Honourable Minister of State, Petroleum Resources, Chief Timipreye Sylva who has had to manage a very difficult tight schedule – playing his role as minister of state petroleum which entails engaging with international engagements and at the same time making out time to ensure that he provides leadership for our party in Bayelsa.

“For us as APC, we are very grateful. We are grateful to the two governors who had to stay 72 hours to ensure the success of the election.. For the governor, this is a call to selfless service, the more support you get the more the expectations. As they say, to whom much is given, much is expected.
When he takes over office in February Bayelsans will see the difference between his government and that of outgoing governor Serieke Dickson.”

On his part, the Governor-Elect, David Lyon said it was one of the greatest days in his life. because the people of Bayelsa had spoken their minds by voting for the APC.

He said,” It is indeed a welcome development because at our campaigns we promised that when elected and sworn in, security and development will be our key agenda and with the support of Bayelsans they have made this possible.

” Today, on behalf of my APC leaders, I promise Bayelsans that, we will serve them and not them to serve us. We also promise to respect leadership which is key for us. Today their vote has been counted and the people of Bayelsa will be respected.

“I am sincerely grateful and to our father, the President of this country, for his fatherly advice this afternoon, as one of his sons in APC, we want to say we Bayelsans will not disappoint APC. We will consult with our leaders, traditional rulers and I believe there will be a serious positive change in Bayelsa State. This incoming administration will make Bayelsans see positive  developments and that is key to us.”